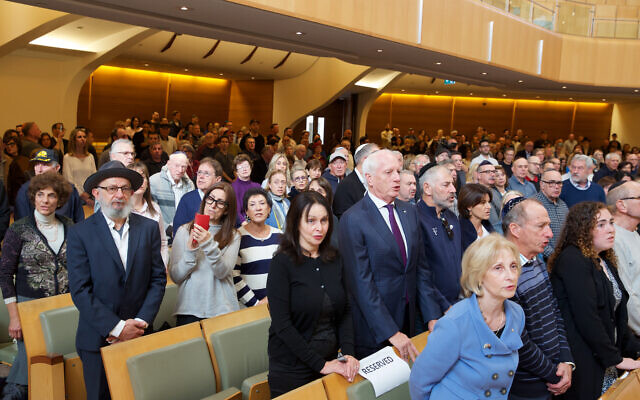 ONLY days after a ceasefire was announced in the latest conflict between Israel and Hamas, the NSW Jewish Board of Deputies (JBOD), in partnership with the Zionist Federation of Australia, the Zionist Council of NSW and the Executive Council of Australian Jewry (ECAJ) proudly held a rally in peace and solidarity with Israel. I had started in my role at JBOD four days earlier – just after Shavuot.

Collectively, a decision was made to hold a rally at the largest available and safe location, which was Central Synagogue.

While we were mindful of images from similar rallies overseas, the collective decision was based on ensuring that the rally conveyed effective messages to both our own community, and the broader NSW community.

Representatives from the Aboriginal, Assyrian, Catholic, Chaldean, Christian, Ethiopian, Greek, Indian – both Hindu and Sikh, Korean and Kurdish communities, alongside bipartisan state and federal members of Parliament were able to proudly attend and participate along with our own community.

The attendance and support of our diverse and multicultural NSW community is something we should all be proud of.

At the rally, Dave Sharma, Federal Liberal Member for Wentworth said, “Israel absolutely and undeniably has a right to defend itself against rocket attacks directed against its civilian population.”

Dr Marjorie O’Neill, State Labor Member for Coogee stated, “Democracy and freedom are principles that have guided modern societies. Israel is the only democracy in the region and it must be protected … Political leaders in western democracies must always call out those forms of antisemitism which include boycotts, divestments and sanctions against the State of Israel. I will stand firmly against BDS and call it out when I see it.”

Two critical messages not only delivered to our community, but to the broader NSW population.

Our friends talked about Israel, its challenges against a terrorist organisation and, not only spread a message to our community that we stand for peace, but to their own political parties and constituents. The same is true to the leaders from other multicultural communities.

Our actions, and the image we portray, should be consistent with our messaging. Our peaceful, respectful, engaging, appropriate and inviting approach is a message to all of NSW, and indeed Australia.

While the rally stood for peace and solidarity for Israel, it also represented how grateful, appreciative and thankful that we all are that we live in an Australian society that is tolerant, multicultural and diverse.

International issues should not be imported, or localised into our Australian culture. Our community, like so many other minorities, should be championing the inclusion and safety we enjoy to openly and proudly practise our faith.

Jillian Segal, president of ECAJ said it best: “The leadership of this community is working tirelessly with great passion and dedication to ensure that our voice is, and will be heard in the media, online, in government, and in every sector of society.”

This is what I have witnessed from my first days in the role.

And while a ceasefire had been declared, the communal leadership together with our community proudly filled Central Synagogue to a COVID capacity crowd (the maximum number allowable under current Health Orders). The rally was live-streamed and is now available to watch or replay. It was also covered by the mainstream media and on social media.

The passion in which people have given their feedback online, in emails and via phone calls is what makes our community truly incredible. It gives me great comfort to know that people want to contribute and provide input – and I thank everyone for that. I invite anyone who wants to participate further to join JBOD and be part of the process.

Operationally, we will be modernising our engagement, building new capabilities, ensuring we are listening more, resolving concerns faster, and supporting our broader community.

Hearing from you matters. The Board of Deputies is here to support you, and while we will not always get it right, we will take the important steps to modernise and improve.

Darren Bark is CEO of the NSW Jewish Board of Deputies.