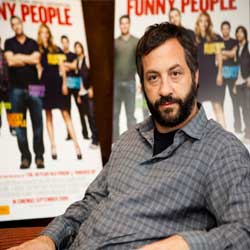 FILMMAKER Judd Apatow is hot property in Hollywood — he has been involved in a host of the biggest films of the past decade, including Knocked Up, 40 Year Old Virgin and Superbad,

Apatow’s latest film, Funny People, is inspired by his own rise to the top and charts the fortunes of a successful stand-up comedian with less than a year to live and his relationship with an up-and-coming stand-up comic.

The film is a who’s who of Jewish talent, including Adam Sandler, Seth Rogen, Jason Schwartzman and Jonah Hill, with cameos from comedians Sarah Silverman, Monty Hoffman and Budd Friedman. Here Apatow talks about his career and his new film.

You tend to make movies about outsiders. Is there something about the Jewish sense of humour that is a good fit for that sort of narrative?

It’s an interesting issue because I’m not religious. My parents refused to let me be bar mitzvahed and I think that was because my grandparents’ families lost a lot of people in the Holocaust. I think my parents were part of that generation that lost faith and so mine was a pretty spiritually empty home, which has haunted me to this day. I talk about it in the movie when Adam [Sandler] is on stage — you can tell the thing that troubles him is he doesn’t believe in God.

He thinks he’s going to die and all he has to turn to is stand-up and comedy, because comedy is what allows him to make sense of the world. That has been the case with me. Then you get older and you start trying to open your head up in an organic way and figure out what you believe in. I’m not sure where I’ll land, but I’m getting old, I’ve got to start thinking about it quick.

Any epiphanies so far?

Yeah. It’s all Scientology. No … I don’t know. I read everything and I don’t really have any answers. The hard thing about being a comedian is that you don’t believe anything. When you see people like George Carlin, they’re all pretty hardcore atheists who think everything’s a fairytale, but in the back of my head I always think that if the universe is infinite, how’s that possible … something else must be going on. Then the idea of something else opens up to me, but then I get tired and watch a cartoon.

For someone with such an existentialist take, your movies are unabashedly Jewish. There are so many Jews in Funny People, playing Jewish characters, it’s like a throwback to the Yiddish theatre days.

Exactly. That’s how I look at them. I’m going to do the next one in Yiddish.

Now that would be something to behold.

I’ll be like Mel Gibson. He does his in Aramaic [referring to The Passion of the Christ], I’ll do mine in Yiddish.

I know you co-wrote You Don’t Mess With the Zohan, but what took you so long to do something like this with Adam Sandler. You guys have been close friends for 25 years.

I never wanted to direct, I always wanted to be a stand-up comedian. Then I realised I wasn’t good enough to be as successful as I wanted to be, and that maybe I was better as a writer. But at that time I didn’t want to be a director, I just thought “okay, I guess I’m a writer”. Then slowly I thought “okay, I guess I should be a director”, but it took about 10 or 15 years to work up the courage to attempt to do it, because I had no skills.

When I was young I paid careful attention to what comedians did and I was schooling myself in how to be a comic, but I didn’t pay attention to what the visuals were in a movie. So I am decades behind in my ¬≠education.

I read the phrase “Apatowian acolytes” recently, referring to the likes of Seth Rogen, Jason Segal, Jonah Hill, Paul Rudd — the list goes on. All these guys have gone on to huge things and there is this perception that you have spawned a sort of movement.

I never thought of it in those terms. After Freaks and Geeks [a short-lived sitcom with a cult following] was cancelled, we did another show called Undeclared and I felt bad that there were all these incredibly talented people that were all out of work. So I encouraged a lot of them to write and I believed a lot of them were good enough to be comedy stars.

Slowly people like Jason Segal [Forgetting Sarah Marshall, Knocked Up] and Seth Rogen [Knocked Up, Superbad, 40 Year Old Virgin] broke through, as well as Jonah [Hill] [Superbad, Forgetting Sarah Marshall] and Jay Baruchel [Fanboys, Tropic Thunder] from Undeclared … James Franco [Spiderman, Pineapple Express]. It did become a little bit of a wave of writers and actors, but it all started with those shows and us not wanting to let go of the experience of working on Freaks and Geeks.

It must be hugely gratifying to see the success of all these guys, if for no other reason than you get to work with all your friends, which I know you enjoy.

Yeah. It’s a great phenomenon that there’s this show [Freaks and Geeks] that people really like, but not many people really watched when it was on and that so many of the people are doing so well. I’m proud of everyone for attempting to write; Busy Phillipps got a credit for thinking of the idea for Blades of Glory — I think it’s a great thing that in addition to their acting, they’re finding other ways to express themselves.

The are more dick jokes per minute in Funny People than in any other film I’ve seen, do you have a team of writers that do dick jokes exclusively?

Every person is great at it. That’s the thing, everyone can handle that area by themselves. You leave any comedy writer alone and he could write a thousand of them, it’s the first skill you learn in comedy college.
The movie is clearly a love letter to stand-up comedians. You said before you were a frustrated comic yourself; is there enough water under the bridge for you to have another crack at it?

I did a little stand-up when I was writing the movie so I could figure out jokes that Adam [Sandler] and Seth [Rogen] could do in the movie. I was able to get up there and hold my own. I was much better than I was when I stopped doing stand-up at 24. But it takes a lot of work, you’ve got to go out every night and hang out at clubs … it’s certainly more challenging when you’re an adult and have two kids. You can’t tell your wife every night “hey, I’m going to go to a comedy club to hang out all night … get drunk and tell jokes”.

I guess so, but it doesn’t pay as well as directing.

There a lot of guys out there that might use the whole big Hollywood director thing to get some time out of the house, away from the wife and two young kids, but you keep casting them in your movies.

My wife [Leslie Mann] is just the best actress in town. She’s viciously funny and goes to a place that most people are afraid to go to with her performances. I’m trying to get across what family life feels like, so by using my kids to play Leslie’s kids I think you get a reality level that you don’t get in movies when strangers are trying to pretend they’re a family. But they don’t act in anything else, just in my movies.

I’m not encouraging them to do this. I’m just using them for my own movies and then they go back to school. They never see it because it’s R-rated, so I’ll show them their scenes. Maybe when they’re older, 15 or 16 years old, and their friends start watching the movies, they’ll get a kick out of it, but as of now they really couldn’t care less. Maude [one of Apatow’s daughters] wants to be a talk show host in Japan. She has no interest in acting.

How’s that panning out for her?

I can actually see how it could work. She refuses to learn Japanese. She’s going to force the crowd to learn English.

You’re living the dream at the moment. Do you have to pinch yourself every now and then?

Absolutely. This is everything I’ve ever wanted to do. When I was a kid, I would take the TV guide and circle all the comedians who were on all the different talk shows so I wouldn’t miss anybody. I always wanted to collaborate with comics and be in that world, so to be able to do that every day is a fantastic thing and I couldn’t be happier that everything’s worked out so well.

And that’s a lot of what the movie’s about, how much I love comedy and the moment when I was first allowed to interact with my heroes.

You’ve tried to do something noticeably different with this film in taking more of a dramatic turn. Was that a challenge from a writing perspective?

It’s always difficult to just give it up and not try to write the movie to just please people … when I wrote the movie I thought “I’m going to tell the truth, I’m not going to obsess on how much fun it is for the audience”. I figured if it was truthful and hopeful, people would really connect and love the movie.

But I also have to go all the way, and if I go all the way it should also be really, really funny, because it is a story that takes place in the world of funny people. But you are making a choice by saying “I’m not going to wax anybody, I’m not going to do a big drunk driving comedy sequence, I’m going to get to the root of something that is very real for a lot of people”.

Punch-Drunk Love was a while ago now and people forget that Adam Sandler is actually a world-class dramatic actor, because he’s usually playing some sort of man-child in a bizarre situation.

Yeah. I would sit in editing and think “I have to make the movie as good as Adam’s performance”. It really is remarkable what he achieves in the movie. He’s very funny, very sad at times, very joyous at times — he didn’t hold anything back. He was very brave every day and I hope people appreciate the complexity of that character.

You’ve been good friends for a long time now, are you affected by the success you’ve had or do you sit around the Shabbat table, have a couple of beers and just laugh about it?

We did. The entire time we shot the movie, me and Adam could not have been more appreciative of our situations and more delighted that we wound up making a movie together. We lived together right when we moved to town [Los Angeles], and this was our dream. To make a movie about our dream, which commented on so much that we’ve gone through, felt very special and we were very sad when it ended.

And when all the press ends in about two weeks, I’m sure I’ll be devastated, because I won’t ever get the chance to make another movie like this again. The whole time we said “we’re only going to do one of these”.