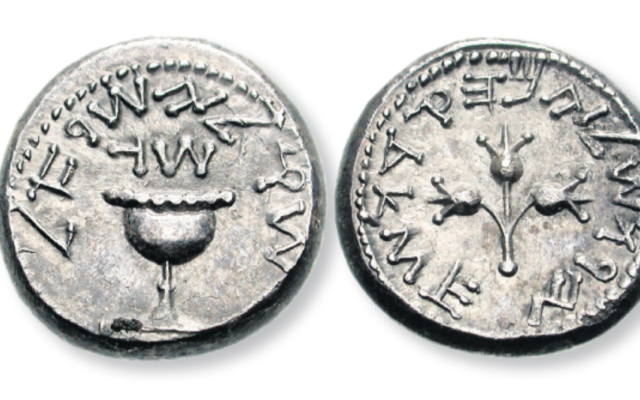 As the financial year of the temple treasury began on Rosh Chodesh Nisan from which date certain requirements of the sacrificial service could only be purchased with funds from that year, those proclamations were made to give a month’s notice to people to pay these annual dues required to be deposited in the temple Treasury. And in memory of that — and in anticipation of its restoration — we read each year on the Shabbat before (or on) Rosh Chodesh Adar, regarding the mandated annual donation of half a shekel.

But a perusal of our literature from the Torah and later biblical period onwards indicates that there is much more to shekalim than just that tribute that kept the Temple operating. They feature throughout our history, from the time of our patriarch Avraham born according to the calculation in Bereshit in the year 1948, to the establishment of Modern Israel, in 1948 CE.

The first reference to shekalim in the chumash concerns Avraham’s purchase of Me’arat Hamachpelah, for four hundred shekels of silver (most likely pieces of a given weight rather than coins as we know then). Four centuries later in regard to building the mishkan and its vessels the word shekel appears regarding both silver and gold — again it was not necessarily a coin but actually as per the meaning of the Hebrew root sh’k’l a weight. Of course the original shekel (or half shekel) pieces/coins contained the appropriate weight of the precious metal — generally silver — thereby gaining their value. Even till well into the 20th century the value of many coins lay in their precious metal content, not as today a nominal ascribed value. Examples with which readers may be familiar include American silver dollars once widely current, English half crowns and even the first post-decimalisation Australian round 50 cent coins.) The five one shekel coins used for redemption of the first born were once weights of silver and then they morphed into silver currency coins. Today they are often specially made in Israel with about 24 grams of silver in each of them.

However regarding shekalim dedicated to the Temple, it seems that even in the biblical era,as time went on, matters were not always as they should have been in regard to those donations. And so, as per the haftarah read on Shabbat Shekalim, (Kings II 12) the King Yehoiash protested to the kohanim that not all the relevant funds were properly expended by them. Accordingly he had a large receptacle — effectively the first recorded money box — placed by the altar into which funds were to be placed as donated and only extracted as required for proper purposes.

Beyond the issue of the financial year for Temple purposes as a determinant of their relationship with the month of Adar, a fascinating midrash suggests a connection between the shekel donations prescribed by the Torah and the Purim story itself. In the Megillah we read that Haman offered King Ahashverosh 10,000 shekalim of silver if he was given the right to kill the Jews.

Says the Midrash, in anticipation of Haman’s wickedness God determined that all Jews should give their shekel (or at least commit to giving it) prior to Purim and our shekels that preceded his would nullify the evil decree. Hence to this day we fulfil the custom of mach’zit hashekel (the half shekel) by giving to charity on Ta’anit Esther just prior to Purim,  three coins that are half of the contemporary currency unit.

Josephus records the extent to which in Roman times the half shekel was brought even from Diaspora communities. But the shekel took on new and very significant meaning at the time of the Revolt towards the end of the second Temple era, and again during the Bar Kochba revolt. On both occasions, as a symbol of yearning for Jewish independence Jewish Judean shekels were minted, with Jewish motifs (lulav and etrog; temple vessels). Some even had an inscription “l’cherut yerushalayim —, for the freedom of Jerusalem”. Many involved the Jewish motif stamped over the original Roman coins; minting much was a symbolic act negating the might of sovereign Rome. Such coins, whether in museums or even available for purchase today albeit at a cost, give us, millennia after those events, the ability to physically connect to our history.

From the earliest Zionist period, the “shekel” was the term used to denominate contributions to building up the land. And following on from those coins symbolising revolt against oppression and a desire for independence, modern Israel’s first postage stamps depicted some of those coins. Subsequently of course the appellation “lira” for the unit of currency carried over from non-Jewish sources was replaced with the Jewish Hebrew term “shekel”.

We are told that when Moshe Rabbenu was told that the half shekel when given by the people “would atone for their souls” (Shemot 30:16) he asked how that was possible. How could a bit of metal have spiritual impact? In response God showed him a coin of fire, to teach that a coin is not just a lifeless object but symbolises burning desire. And indeed it does.