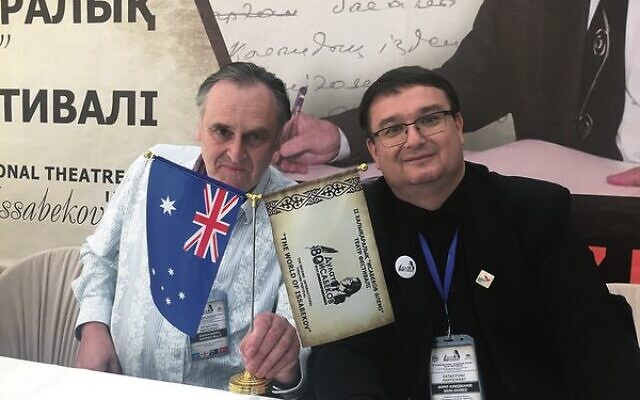 The story goes like this: 800 years before women’s liberation there was Borte – the childhood sweetheart, great love, friend and outspoken critic of Genghis Khan, and the first empress of the world. Now, her story, which is more resonant than ever, is being told.

Known as one of the most influential and important people in Genghis Khan’s life, it has been speculated that Borte’s capture by a rival tribe and Khan’s daring rescue may have even started his path to becoming a conqueror.

While few historical facts are known about Borte, there are legends, particularly in Mongolia. It’s also a well-known fact that Borte was the inspiration behind many of Khan’s decisions. Importantly though, Borte was left behind as Khan forged his empire – ruling her own territory and managing her own court. In fact, she was a pretty fascinating woman. Which is why when Warren Wills was asked to help with the music for a new performance about her life, he jumped at the chance.

“During the dark recesses of the lockdown, while under house arrest here in Melbourne, I got a call from the chairman of the Eurasian Creative Guild … would I be interested in presenting a new script by Dulat Isabekov called Borte?” he explained. “She being an incredible character, very little known in the West, she is the childhood sweetheart and the long-suffering wife of Genghis Khan.

“And in a world of diminishing rights of women, in particular it’s great to see a woman – first empress of the world – dedicated, courageous, loyal, loving but very outspoken and feisty, who certainly was very opinionated in the court of Genghis Khan back in what was the greatest empire of the world, up until the British empire of the 20th century. So I said, sure, let’s give it a go.”

And give it a good go they did.

Soon, Wills found himself in Almaty, Kazakhstan, to represent Australia at the International Theatre Festival, putting on a boutique version of Borte.

Following that, Wills went to London to stage the production at the Kazakhstan embassy, coinciding with the arrival of the new Kazakh ambassador, who was so enthralled by the piece that he posted it all over social media.

It very quickly went viral, which Wills acknowledged was “great profiling for the future”.

And now, the full production will be opening in Melbourne’s Arcadia House, which Wills says is a fitting space for such an amazing woman.

“It’s an incredible venue, a 100-year-old 400-seat art deco ballroom, we’re doing it in the round so it’s immersive theatre,” he explained.

The production will feature inclusive music theatre company the Young World Choir and is part of the Eurasian Arts Festival.

“We’re very excited to welcome the delegations from Eurasia, from Israel and from London next week, and as I said, it’s an incredible venue to be front and centre of the inaugural Eurasian Arts Festival.”

Borte will be showing from December 10-16 at Arcadia House, North Melbourne. Tickets: events.humanitix.com/borte/tickets