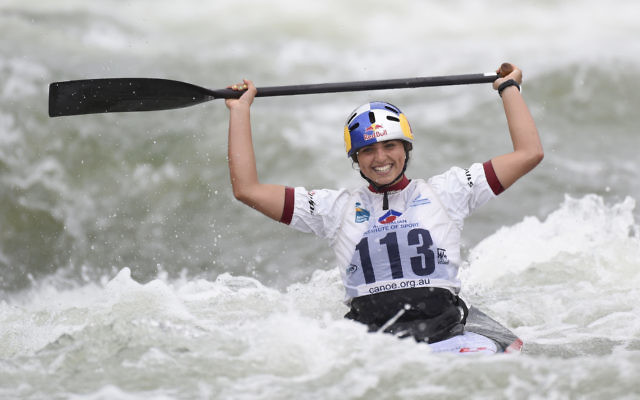 Jessica Fox celebrates after her historic double-gold in C1 and K1 events at the World Championships in September. Photo: Delly Carr

AS world champion slalom canoeist Jessica Fox prepares for another season on the white-water circuit, the Penrith native sits down with AJN journalist Evan Zlatkis to discuss her rapid rise.

EZ: Let’s talk about last season first. Not only did you win the K1 (kayak) and C1 (canoe) at the Under-23 World Championships in your hometown, but you also took gold in both events at the ICF World Championships in June. And you’re only 20 years old. How does it feel to be top of your sport at such a young age?

JF: It’s all been very exciting. Every year we set targets and goals that we want to achieve, and last season I aimed pretty high with the under-23 championships. I wanted to win both the K1 event and C1 event and I achieved that in April, which was awesome. Then I wanted to build on my performances at the world cups this year. I just wanted to win the C1 again, defend my [2013] title, and hoped to make the final in the K1, maybe even push for a medal. But to go on and win it, becoming a double world champion at the senior level, I never expected this so early in my career.

What was the highlight for you?

Well it’s definitely the best year of my career so far. I probably couldn’t have done much better. The under-23s were a real highlight, racing at home and dealing with that pressure. And then the World Championships – to end the season on such a high was great.

How is it having your ex-slalom canoe champion mum, Myriam, as coach?

It’s a good at the moment; we get along really well. Mum knows me better than anyone else. We’re quite different so that could be why we get along well. But we don’t clash either. As a mum, we get along great, and as a coach, she’s had a lot of experience and she knows what she’s talking about so I definitely trust her in that regard.

Is she a big reason for your improvement last season?

Of course. We always try to keep improving every season, every day that I get on the water. Also this year I was doing a lot of technical work and strength training with a new coach, Julian Baulliet and really think that helps my paddling as well.

I was just really hungry for it the season and really looking towards getting overseas and racing.

Along with your mum, your dad Richard is also an ex-world champion canoeist. In fact, you won the World Championships in the US exactly 25 years after they did in the same place. Did you grow up knowing you wanted to follow your parents into the sport?

No not at all. I guess growing up by the riverbank and getting dragged along everywhere, I knew what the sport was and didn’t enjoy it, because it was my parents’ thing and it felt like they were pushing. And they didn’t ever really push me into it, but the kayaks would always come away with us on weekends and holidays. Now when I look back on it, I can see that it was something really special and I’m glad that it did happen that way and I should have appreciated it more. So now when we do take the kayaks away and share this as a family it’s really special.

But I didn’t take up the sport until I was 11. Before that I was doing swimming and gymnastics. You can’t go on the white-water rapids until your 11 or 12, which is what I actually enjoyed.

What is it you enjoy so much about the sport?

I love that it’s an outdoor sport and takes me to amazing places around the world. I get to paddle on natural rivers and artificial rivers and I love getting out on a natural course. So you’re on the water, playing with the waves, using the water to help get speed, not to fight it but to be one with the water. I love that you can get on a river and learn something new, and it’s always different, always changing and challenging. It’s hard physically and technically, but it’s a great challenge.

What do you do away from the water?

I’m doing a bachelor of social science psychology, majoring in psych and media. The course is at Swinburne University, in Melbourne, but I’m doing it online because otherwise I would have to defer the second semester every year.

One thing I miss is having a Uni social life, but I’ve got great friends from school so I don’t feel like I’m missing out too much. The path I chose I knew I would never get that college experience, but it’s something I’m ok with because my goal is to go to the Olympics and I know what I have to do to get there.

In July you won Maccabi’s Most Outstanding Jewish Sportsman of the Year award and just recently you received the Prime Minister’s Outstanding Women in Sport award. How does it feel to be recognised by your community and your country?

It’s honestly not something you think about when you’re competing and going about the training and your goals. But to have that recognition when you do achieve something it’s a really special feeling. Maccabi has been a big support to me over the last few years, and having their support and recognition of the whole community is amazing. And winning the Prime Minister’s award last week is a huge honor and something I didn’t expect at all to win. I was really touched and humbled to win that so it was exciting.

Winning an Olympic medal was definitely a dream. Just going was already a huge achievement and a dream comes true. But now that I’ve achieved that I guess I have to aim higher (laughs).

Getting to the Olympics is really tough; there’s only one girl who can go to the Olympics from Australia and there’s three of us in contention.  To get to another Olympics in Rio would be fantastic and obviously we dream of that gold medal.

Who is your biggest inspiration?

Both my parents are obviously big influences. But then there are athletes like Anna Meares. I met her and she actually put her gold medal around my neck when I was about 10, after the Athens Olympics. Then in 2012 we were on the same team, so now we know each other. To have that memory shows that you can dream big as a child and something small like that can inspire you.