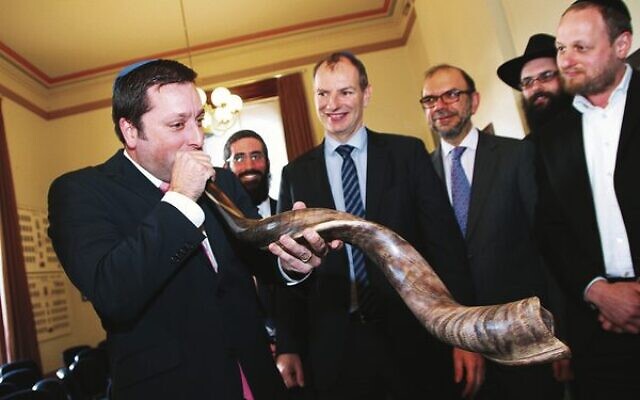 Matthew Guy blows the shofar during a meeting with members of the Rabbinical Council of Victoria in the lead up to Rosh Hashanah in 2015. Photo: Peter Haskin

HAVING retaken the helm of the Victorian Liberal Party as we push closer to the upcoming election, Matthew Guy has hailed the Jewish community and spoken of his admiration for Israel.

Earlier this month, longtime Zionist and supporter of Melbourne Jewry Michael O’Brien was replaced as Opposition Leader by Guy, whose landslide defeat at the polls in 2018 saw him hand the reins to O’Brien.

Speaking with The AJN, Guy reflected on past occasions he had spent with the Jewish community, including Yom Ha’atzmaut celebrations and the rally for Israel and Peace, and said he plans to “continue to develop this strong relationship as Opposition Leader and hopefully, as Premier”.

“I am in total awe of probably the most-organised community in Victoria as it rallies around its members and supports each and every one at each life stage and at each momentous life milestone,” he said, acknowledging the community’s contribution to the state of Victoria.

The reportedly skilled shofar-blower took a trip to Israel with his new deputy leader David Southwick in 2017 where the pair was plunged into lockdown just hours after arriving in Jerusalem after three terrorists had killed two Israeli police officers in the Old City.

The Liberal leader said the trip “left a deep, meaningful and positive impression and a hunger to return to experience and learn more”, adding that he looks forward to returning to Israel when possible.

While recognising that “we are not in the same position that we were in in 2020”, Guy said he believes “that we have to consider options, including outdoor gatherings, to enable family, community and religious groups to gather in a safe manner”.

“I am well aware of the extreme impact the closure of synagogues has had on many members of the Jewish community and this pains me,” he said, adding that “religious ­institutions are integral to the lives of many people and many faiths”.

Commenting on the scenes in Ripponlea over Rosh Hashanah where police clashed with shule-goers, the Opposition Leader said he was “appalled”, asserting that “we must do whatever we can to ensure the relationship between Victoria Police and the Jewish community remains strong, as it has been for many years”.

Guy reiterated that he and the Victorian Liberal Party “are strong supporters of the State of Israel” and said “this relationship will continue to flourish under my and David Southwick’s leadership for the foreseeable future”.