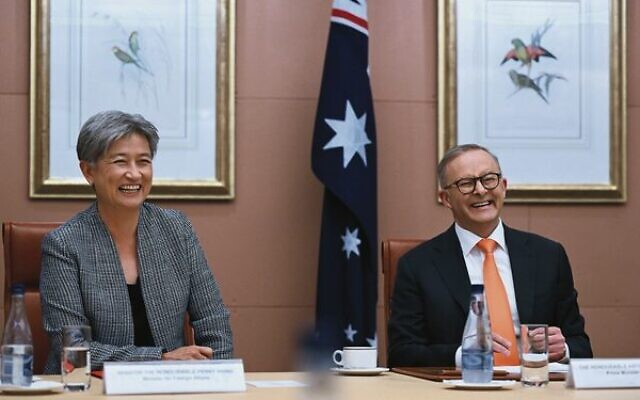 Late on Monday, October 17, a news story marked as “Exclusive” was published by The Guardian Australia reporting that the Department of Foreign Affairs and Trade (DFAT) had removed two sentences from its website that had, until then, confirmed that “Australia recognised West Jerusalem as the capital of Israel.”

The Guardian’s political editor, Katharine Murphy, subsequently disclosed on ABC TV’s Insiders program that The Guardian had for “more than a week” beforehand repeatedly questioned DFAT about whether this content would change. The full circumstances, including the question of whether any other people were involved in these communications, have not been publicly revealed to date.

According to the Guardian story, the removal of the sentences from the DFAT website meant that “Australia has quietly dropped its recognition of West Jerusalem as the capital of Israel”. The story was quickly picked up by other media outlets.

As it was on the eve of the Jewish holy day of Simchat Torah, the Executive Council of Australian Jewry (ECAJ) and other Jewish organisations were precluded from making any public comment that evening and the following day.

Later, during the evening of October 17, the Foreign Minister issued a statement in effect denying the story. The statement said: “The former government made the decision to recognise West Jerusalem as the capital of Israel. No decision to change that has been made by the current government.” (Emphasis added).

This written statement was sent to the ECAJ at about 8pm AEDT on October 17 with a message that there was no cause for concern, and this was subsequently reported by media organisations in Australia and internationally. No intimation was given by the government that the policy confirmed in this statement was, or might be, on the verge of being overturned.

A meeting of the government’s national cabinet took place early on the morning of October 18. It decided that, notwithstanding the Foreign Minister’s statement from the night before, Australia would reverse its recognition of west Jerusalem as Israel’s capital.

The government made no attempt whatsoever to consult with, or even advise, anyone in the Jewish community about this decision before it was taken. This was contrary to several assurances that had been given, among others, to the ECAJ by the Prime Minister, at his Zoom conference with the ECAJ and Jewish community on July 13, 2021, and at a Sydney fundraising dinner with Jewish community supporters on March 22, 2022, that no major changes in Australian policy concerning Israel would be taken without consultation with the community’s representatives.

The Foreign Minister had given similar assurances when she met with Jewish community representatives. Israel’s many supporters within the ALP, including Federal ALP MP Josh Burns and other ALP MPs, were equally taken by surprise.

West Jerusalem is the location not only of the Knesset, Supreme Court, official residences of the President and Prime Minister and key organs of government but also of other fundamental institutions including Mt Herzl, the national war cemetery, Yad Vashem and the Israel Museum.

Whilst a number of people within the government privately conceded that the policy reversal was problematic in substance, and that the process that led to it was indefensible, the government officially tried to justify itself.

It attempted to deflect attention away from the shortcomings of its processes by reviving its criticism of the previous Coalition government’s “decision to play politics” in December 2018, when it had recognised west Jerusalem as Israel’s capital, following the announcement of its intentions to that effect in the lead-up to the by-election for the seat of Wentworth, with its large Jewish constituency.

The criticism was a plausible one, but it overlooked a critical fact. The December 2018 decision to recognise west Jerusalem as Israel’s capital was not made until after the completion of a rigorous review and consultation process with “a broad range of Australian community representatives, including some eminent Australian policymakers”, which was conducted by the departmental secretaries from Prime Minister and Cabinet, Foreign Affairs and Trade, Defence and Home Affairs.

This was not mere window dressing. Those who conducted the consultation recommended that only west Jerusalem, rather than Jerusalem, be recognised, and that the Australian embassy in Israel should remain in Tel Aviv for the time being. The then prime minister, Scott Morrison, accepted these limitations, even though they were not what he had proposed.

Nothing even remotely approaching such a process was undertaken by the current government when the policy was reversed.

The government also sought to defend itself from criticisms from the Jewish community by asserting that Labor had committed itself all along to reversing Australia’s recognition of west Jerusalem as Israel’s capital. This assertion was misleading and far from the whole picture.

As Shadow Foreign Minister in December 2018, Penny Wong had tweeted, “Labor does not support unilateral recognition of Jerusalem as the capital of Israel and in Government would reverse this decision.”

This policy was confirmed explicitly in the lead-up to the May 2019 federal election in the ALP’s written answers to the ECAJ responding to the ECAJ’s pre-election questionnaire.

After its election loss in 2019, Labor went quiet on the subject. Those who had opposed Australia’s recognition of west Jerusalem as Israel’s capital had issued a chorus of dire warnings that such recognition would imperil Australia’s diplomatic and trade relationships with Muslim majority countries, especially the pending trade deal with Indonesia, and lead to mass street protests and violence among Palestinians and in the wider Middle East.

None of these predictions came to pass. On the contrary, from 2020 onwards five Arab countries signed normalisation agreements with Israel. The deal with Indonesia went ahead in March 2019.

It was against this background that the ECAJ’s pre-election survey in 2022 asked: “Please outline your party’s policies on the recognition of Jerusalem as Israel’s capital, including any additional measures it would take if elected to government.”

Labor’s answer this time was: “Labor believes the status of Jerusalem should be resolved as part of any peace negotiations and two-state solution – this is the position of successive Australian governments. We note that in recent years, Israel and some of its neighbours have taken positive steps to normalise their relations which Labor has strongly supported as further building blocks towards regional peace and stability.”

Significantly, there was no statement as previously, that Labor would reverse the Morrison government’s decision. Was this misleading? It was certainly less than full disclosure.

On the substantive issue concerning the status of Jerusalem, the government’s stance was equally problematic. The rationale given by the government for its decision was that Australia’s recognition of west Jerusalem as Israel’s capital had pre-empted the outcome of peace negotiations between Israel and the Palestinians on a key (“final status”) issue, and thereby undermined the prospects for reaching agreement.

In reality, west Jerusalem has not been the subject of negotiations between Israel and the Palestinians for the simple reason that west Jerusalem has been a part of Israel’s sovereign territory since the founding of the state in 1948, and its official capital since January 1950.

In particular, the territory of west Jerusalem lies outside the scope of UN Security Council and General Assembly resolutions concerning Jerusalem that have been passed since 1967, which are expressly limited in their application to the parts of Jerusalem occupied by Israel since 1967. No UN resolution has ever called on Israel to withdraw from west Jerusalem.

West Jerusalem is the location not only of the Knesset, Supreme Court, official residences of the President and Prime Minister and key organs of government but also of other fundamental institutions including Mt Herzl, the national war cemetery, Yad Vashem and the Israel Museum.

Since the conquest of the city by King David and the Israelites 3000 years ago, Jerusalem has not been the capital of any state other than Jewish states – the ancient Kingdoms of Israel and Judah and the modern State of Israel. Over the last three millennia, when it has not been the capital of a Jewish state, Jerusalem has been under foreign rule.

Leaving aside its deleterious impact on the relationship between the government and the Jewish community, the reversal of Australia’s recognition of west Jerusalem as Israel’s capital does not bode well for the future of Australia’s relations with Israel. This is no way to treat an ally whose intelligence-sharing with Australia has prevented at least one terrorist attack against Australians that we know of.

Worse, the decades of bipartisanship on key questions to do with the Israel-Palestinian conflict will now most likely give way to a continual cycle of partisan contest.

In the meantime, we will continue to express the community’s opposition forcefully to the government about both the substance of Australia’s changed policy and the process, such as it was, that led to it. And we will work to undo this appalling government decision.

Peter Wertheim is co-CEO of the Executive Council of Australian Jewry.