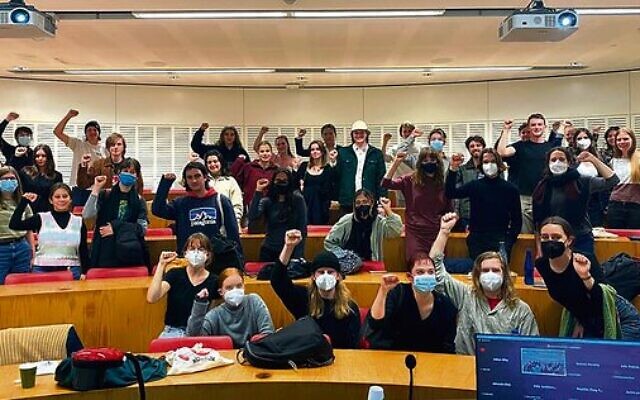 The supporters of a new University of Sydney Students’ Representative Council (USYD SRC) motion “patronisingly assert that they know better than Jews what antisemitism is”, the Executive Council of Australian Jewry said this week.

The June 1 motion entitled “From the River to the Sea” refers to Israel as an apartheid state and condemns “major institutions in Australia” and both the Liberal and Labor parties for remaining “complicit in the Israeli occupation of Palestinian land”, saying that in doing so they “defend apartheid”.

It called on other student unions to “stand against the Israeli occupation of Palestine and condemn the ongoing ethnic cleansing of Palestinians” and said to “champion the cause of Palestine is a basic anti-imperialist and anti-racist act”.

It also called on the University of Sydney to “divest from Israeli institutions” as well as to “uphold the academic boycott of Israeli universities”, calling their actions and the passing of this motion “a basic duty of progressive student unionism, to stand with the oppressed against the oppressor”.

The SRC said it “rejects the idea that opposition to Israel is antisemitic”, saying, “not all Jewish people support Israeli apartheid.”

The UMSU motion was rescinded under threat of legal action.

The USYD SRC highlighted that it opposes the attacks on UMSU after it passed that motion in solidarity with Palestine.

It also noted that the UMSU motion being “rescinded under pressure sets a bad precedent”. It said it supports “ongoing efforts to reinstate the motion”.

The council also highlighted that it stands in opposition of “right-wing intimidation, through the threat of a lawsuit”, referring to the case Melbourne University postgraduate student Justin Riazaty built against UMSU.

Australasian Union of Jewish Students (AUJS) president Natalie Gunn and vice-president Alissa Foster said in a joint statement, “The repetitive antisemitic motions being passed by the University of Sydney SRC and their reluctance to engage constructively with AUJS, highlights the unfortunate normalisation of disseminating misinformation on campus.”

Executive Council of Australian Jewry co-CEO Peter Wertheim said the heading “From the River to the Sea” is “an overt denial of the right of Israel to exist, a call for the extinguishment of a nation-state”.

“It is a denial of the right of national self-determination of the Jewish people, a crude form of antisemitism. The supporters of the resolution patronisingly assert that they know better than Jews what antisemitism is. This assertion itself is antisemitic, and founded in ignorance,” he said.

“The University of Sydney administration needs to condemn the resolution as antisemitic, dissociate the university from, and repudiate, the views expressed in the resolution … and adopt the IHRA Working Definition of Antisemitism without delay.”

ZFA president Jeremy Leibler said that this motion is “awash with lies and obfuscations”.

“It does absolutely nothing to advance Palestinian statehood, but instead spreads hatred, lies and extremist rhetoric that clouds minds and makes life more difficult for the thousands of students on campus that actually want the Israeli–Palestinian conflict to be peacefully resolved,” he said.

He added, “The motion also labels Jewish students who back Israel as racists … the end result is that Jewish students will feel so threatened, isolated, and under siege that they will feel compelled to hide their Jewish identities.”