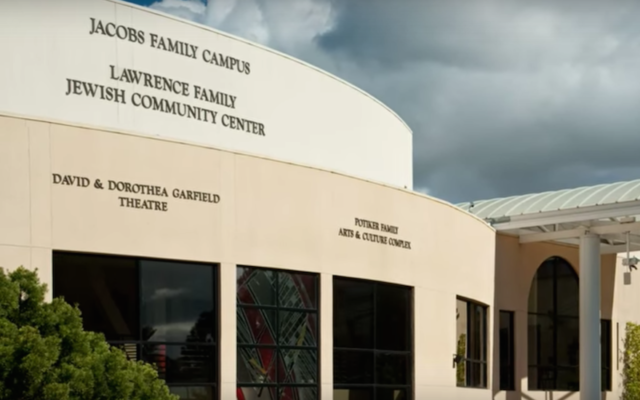 The Lawrence Family JCC in San Diego was evacuated after receiving a bomb threat in an email.

At least seven Jewish community centres (JCCs) in the US and Canada received bomb threats while they were hosting Purim events.

The threats, either called in or emailed, were reported on Sunday at JCCs in Rochester, New York; Chicago; Indianapolis; Milwaukee, Wisconsin; Cleveland; Houston; and Vancouver.

Most of the JCCs were evacuated and searched. None of the threats turned out to be credible.

For some of the centres it was their second threat in the past week.

More than 150 threats have been received by JCCs, Jewish schools and other Jewish institutions since the beginning of the year, according to the Secure Community Network, which coordinates security across Jewish organisations in North America.

On Sunday, New York Governor Andrew Cuomo called the second such threat against the Rochester JCC in less than a week “a despicable and cowardly act” of anti-Semitism. Cuomo ordered the New York State Police to launch a more intense investigation into the threats, and to work with federal and local law enforcement on the investigation.

“Like all New Yorkers, I am profoundly disturbed and disgusted by the continued threats against the Jewish community in New York,” Cuomo said in a statement. “As New Yorkers, we will not be intimidated and we will not stand by silently as some seek to sow hate and division. New York is one family, and an attack on one is an attack on all.”

Wisconsin Governor Scott Walker said he plans to provide additional law enforcement intelligence and staffing to the JCC in Milwaukee so it “continues to be a safe place” after it was evacuated on Sunday for the fourth time in six weeks.

Meanwhile, a rally was held on Sunday outside the Rady Jewish Community Centre in Winnipeg, Canada – which had been evacuated due to a bomb threat on Thursday – “to send a signal of unity against fear and terrorism”.

Meanwhile, a St Louis man accused of making at least eight bomb threats against Jewish community centres and the Anti-Defamation League must remain in jail until his trial, a federal judge in that city ruled.

Noce said that allowing Thompson to post bail and leave jail would “not reasonably assure the court that he will not endanger the safety of any other person or the community”.

Thompson, who was arrested on March 3, has been charged with cyberstalking, which carries a maximum sentence of five years in prison. He has no previous criminal record. He made some of the threats in the name of a former romantic partner he had been cyberstalking, according to the US Attorney of Southern New York.

Thompson’s public defender at a hearing last week had requested house arrest and GPS monitoring, and said his client would stay at the home of his mother and stepfather in St Louis.

The judge responded on Monday that allowing Thompson to stay in the home from which he had allegedly made some threats might not stop him from making more, and that GPS monitoring might prevent him from fleeing but would not stop threats, according to the Post-Dispatch.