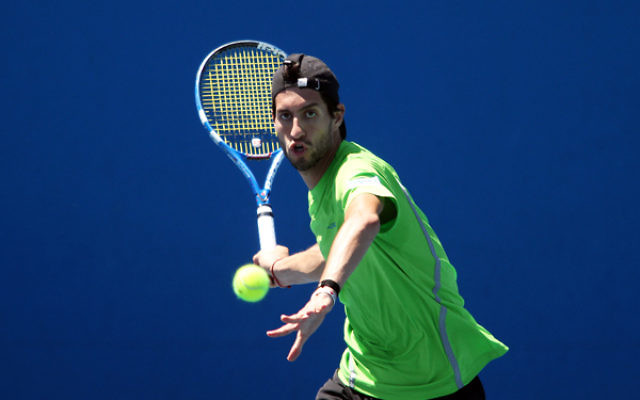 JEWISH tennis stars Shahar Peer, Amir Weintraub and Jesse Levine have all won through to the second round of the Australian Open, while Dudi Sela and Camila Giorgi were sent packing in the first round at Melbourne Park.

Click here to view photos from the Australian Open Qualifying

Peer defeated Russian Alexandra Panova 6-4, 1-6, 6-3 in a seesawing affair. The 25-year-old recorded her first international win in months and is confident she can return to the form that got her to the world number 11 ranking in 2011.

“I’m really happy,” Peer told The AJN after her win.

“I’m starting to get things together, it’s going to be a slow process, but I’m ready for this challenge.

“It was not a great two years and it happens, but now I’m back with my old coach Pablo [Giacopelli], so it’s a process, but hopefully we can do the work again.”

Weintraub breezed through to the main draw after a stellar qualifying stage, where he defeated Jewish players Wayne Odesnik and Diego Sebastian Schwartzman, and then continued his incredible run of form with a comfortable 7-6, 7-5, 6-2 win over Argentine Guido Pella.

The world number 196 is in the best form of his career and will take confidence from recording four wins from four matches in Melbourne ahead of his tough second round match-up with German 17th seed Phillip Kohlschreiber.

“I didn’t expect it,” Weintraub said.

“If you asked me at the beginning of the week if this is going to happen, I would say “are you joking me”, but I’m very happy it is.”

The Canadian battled for over three hours to record the victory and will now take on 14th seeded Frenchman Gilles Simon.

The country’s top male player entered the main draw on a roll after three convincing wins in the qualifiers, but the world number 113 couldn’t maintain his form.

“I felt very confident I could win that match,” Sela said after the match.

“I played very well in the qualifying … but the draw was terrible, even if I did win I would have played [Roger] Federer.

“I like it a lot here [in Melbourne], it’s nice weather and nice people … [and] it’s always nice to play in front of Israelis and Jewish [people].”

Giorgi, ranked 74th in the world, was hugely disappointing in her tie against France’s Stephanie Foretz Gacon, going down 6-2, 6-3 in just over an hour.

Peer will also be taking part in the women’s doubles tournament, teaming up with Russian Alla Kudryavtseva, while Giorgi will play in the same tournament with Switzerland’s Stefane Voegele.

Emerging Israeli gun Julia Glushko just missed out in the qualifiers losing in the second round to Croatian Tereza Mrdeza 0-6, 6-4, 6-3 after a bright start.

Other Jewish players who bowed out during qualifying included American Julia Cohen and Canadian Sharon Fichman.

Click here to view photos from the Australian Open Qualifying