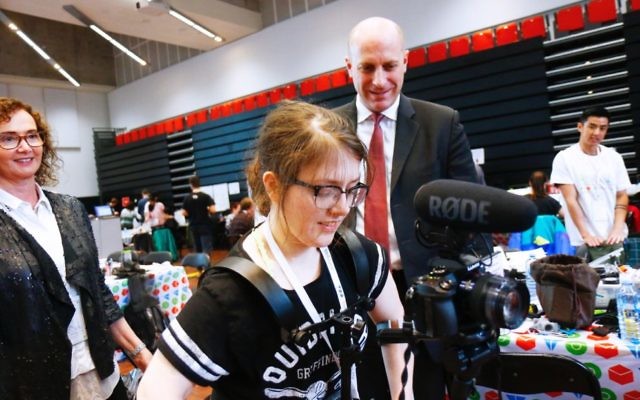 AMY Marks is a media student, passionate about film making.

“I want to produce content for young people with disabilities – what I would have liked,” she told The AJN.

It is a dream not without obstacles. Marks lives with cerebral palsy, affecting her balance and motor skills. She uses crutches, which make it difficult to carry a hand-held camera.

But that was before last weekend, as Tikkun Olam Makers (TOM): Melbourne returned for a second year at Swinburne University of Technology.

The 72-hour makeathon brought together more than 150 “makers”, consisting of technology developers, engineers, designers, craftsman, allied health professionals and programs; matching them into teams with 11 “need-knowers”, Australians who are living with a disability. Each team of makers was tasked with developing a solution which answered the problem for the need-knower – within three days.

TOM: Melbourne is one component of a global network that spans more than 30 communities. Each time a solution is created, it is shared within the ever-expanding network.

Beginning in Israel in 2014, TOM was conceived with the aim of delivering 250 million products within a decade to elderly individuals or those who are living with disabilities, that otherwise have no market or government solution.

Gidi Grinstein, TOM founder, and founder and president of Reut Group, said he is “driven by the passion to do big things”.

Speaking with The AJN, Grinstein explained: “We are a platform for creating and scaling innovative solutions for big social problems that face Israel and the Jewish people and wherever possible making a significant and distinct contribution to humanity.”

Grinstein boasts an impressive list of credentials. Before Reut and TOM, he was a key member of the team that saw the establishment of a worldwide movement with immeasurable impact: Taglit-Birthright.

“Because three of us were in our 20s, we were naive enough to take the vision of Dr Beilin of bringing every young Jewish person to Israel as a gift of the Jewish people, so rather than working up to it, we worked back from it,” he reflected.

With the vision as the epicentre and driving force, Grinstein has adopted a similar approach to TOM. The challenge was “to take all the innovations that are happening here and turn them into millions of products that are delivered to people who need them around the world”.

It is a vision that has brought Amy Marks one giant step closer to realising her dream.

At the close of TOM: Melbourne, Marks’ team of makers had created a metal brace exoskeleton with a telescopic pole to stabilise her camera for filming.

“It has enabled my creativity.

“I’m just excited to put the device to the test,” enthused Marks.