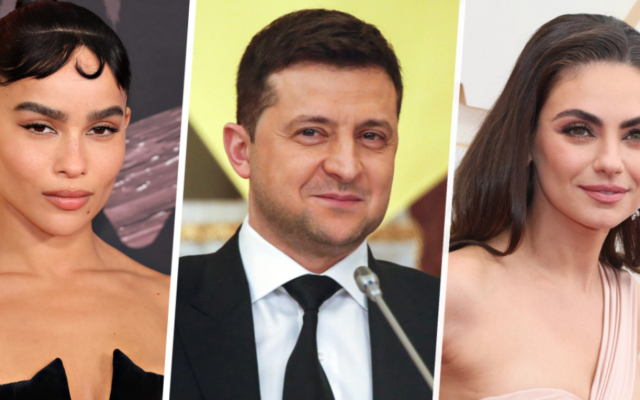 Volodymyr Zelensky, Ukraine’s Jewish president who has been leading his country during the Russian invasion that began in late February, has been named to Time magazine’s annual list of the world’s 100 most influential people.

Zelensky was listed in the “leaders” category, and his entry was written by U.S. President Joe Biden.

Several Jewish entertainers also made the list released on Monday, including another with Ukrainian heritage: actress Mila Kunis, who immigrated from Chernivtsi to the United States at age seven and launched a campaign that has raised over $36 million for Ukrainian refugee aid efforts.

Other actors like Andrew Garfield, Sarah Jessica Parker and Zoë Kravitz were included, as well as Saturday Night Live comedian Pete Davidson, who was just announced to be leaving after seven years on the show.

Taika Waititi, the Māori-Jewish director from New Zealand of JoJo Rabbit fame, had his entry written up by Jewish actor and comedian Sacha Baron Cohen. In JoJo Rabbit, a Hitler Youth member finds out his mother (played by Scarlett Johansson) is hiding a Jewish girl in their attic.

Andy Jassy, who became CEO of Amazon last year, was named in the “titans” category.

Other Jews who made it on the list include photographer and opioid crisis activist Nan Goldin, who led protests against museums’ ties to the Sackler family of Purdue Pharma, and David Zaslav, CEO and President of Warner Bros. Discovery.