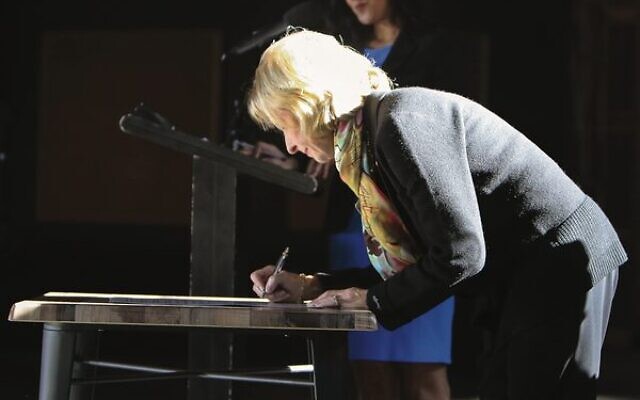 “We are privileged to live in an era when the long, peaceful and dignified quest for justice by First Nations Australians may at last be realised,” Executive Council of Australian Jewry (ECAJ) president Jillian Segal said this week.

Segal was one of nine diverse faith leaders to sign the Joint Resolution on the Uluru Statement from the Heart – on its fifth anniversary – at a ceremony at Sydney’s Barangaroo last Friday.

The resolution calls on political leaders to take immediate bipartisan action to hold a referendum on a First Nations voice to Parliament. It follows Prime Minister Anthony Albanese’s election night commitment to the Uluru Statement.

Segal said it was a “great honour” to represent the Australian Jewish community at the signing.

“Australia has been on a long journey to come to terms with our nation’s origins,” she said.

“Milestones have included the overturning by the High Court of the fiction of terra nullius in the Mabo case, the reconciliation movement, bringing home the stolen generations, closing the gap and the Uluru Statement.

“Australia is still on that journey, and it is perhaps the single most significant item of unfinished business on our national agenda.”

She added, “It is wonderful to be able to join with leaders from so many other diverse faith communities – all united to give First Nations people a voice in their own affairs.

“The Jewish community should not be frightened by a referendum to bring this about but support it strongly. We, above many others, understand the importance of moving forward from a troubled past to a more hopeful future and we should appreciate the significance of this initiative.”

“Cooper was the first person in Australia to publicly stand up for the Jewish people in the years leading up to the Holocaust,” the son of Holocaust survivors said.

“Cooper used his energy to fight for the rights of Jews who he had never met, despite the oppression his people were experiencing in their own land.

“William Cooper’s action supporting my people … remind us why we, as non-Indigenous multicultural Australians have a duty to actively support Indigenous people in their modest request for a constitutional voice.”

There has been much debate about the Uluru Statement since its endorsement in 2017. Extreme criticism has included accusations that a First Nations voice to Parliament would create an apartheid situation or a “third chamber of Parliament”. This was swiftly debunked by keynote speaker, Indigenous filmmaker Rachel Perkins. “We ask for a voice in our own affairs,” she said.

“Not a veto, just a voice. Non-binding, but a constitutional promise that Indigenous people will always be heard, that though our advice may not always be heeded, we will always have a place at the table in this, our own country.”

Jewish federal MP Julian Leeser, who chaired the Joint Select Committee on Constitutional Recognition of Aboriginal and Torres Strait Islander Peoples, said, “It’s great to see a range of organisations across the breadth of Australia’s religious communities supporting the concepts that underpin the Uluru statement, particularly the voice, something which I’ve been a strong proponent of, for many years.”

Leeser is also a co-founder of Uphold and Recognise, a non-profit organisation aimed at encouraging constitutional conservatives to support Indigenous constitutional recognition.

Meanwhile, Jewish communal leader Mark Leibler, a longtime advocate for an Indigenous Australian voice to Parliament, used a column in The Australian on Monday to urge the Coalition to work with the Labor government towards a referendum.