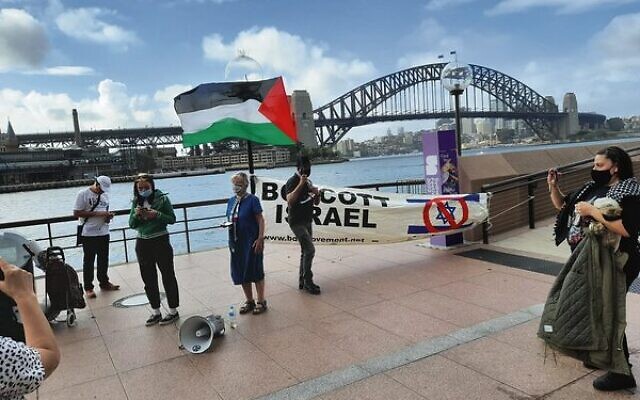 Protesters outside the Sydney Opera House ahead of the performance of Decadance.Photo: Palestine Justice Movement Sydney, Instagram

NSW shadow arts minister Walt Secord has called for the introduction of American-style anti-BDS legislation in the wake of the Sydney Festival boycott.

Several artists and productions withdrew from the festival in protest over the Israeli Embassy’s sponsorship of $20,000 to facilitate the dance performance Decadance, among them comedians Judith Lucy, Tom Ballard and Nazeem Hussain, the Darlinghurst Theatre Company play Seven Methods of Killing Kylie Jenner and First Nations dance company Marrugeku.

Their action received the backing of terrorist group Hamas, who according to the Palestinian Information Centre, said in a statement, “We commend and appreciate this decision. We declare our solidarity with the participants who have withdrawn from the festival.”

Organisers of the boycott have accused the festival of “art-washing apartheid”.

Announcing his withdrawal, Ballard posted, “I love the festival and I love telling jokes but standing up for human rights and standing against a system of apartheid is more important.”

For her part, Lucy said, “I can’t support the actions of the [Sydney Festival] board, particularly their sponsorship deal with the Israeli Embassy but also leaving their artists in the sh**.”

“Put simply, I believe that if an organisation takes the decision to institute or support a boycott of Israel, that is their prerogative – but then it should not expect to receive any state government funding,” Secord said.

The NSW Parliamentary Friends of Israel deputy chair said he feared the festival boycott would make arts groups reluctant to invite Israeli performers and artists, or refuse to stage Israeli or Jewish-themed plays.

“Boycotts, apart from being repugnant, are inexplicable if your goal truly is a peaceful resolution to the conflict,” he added.

JBOD CEO Darren Bark said, “We call on the NSW Government to disavow BDS and to ensure that no government funding or investment goes to an organisation that participates or supports BDS”.

Meanwhile, conservative advocacy group the Australian Jewish Association has called for legislation tackling BDS to be introduced at the federal level.

But Executive Council of Australian Jewry co-CEO Peter Wertheim said “there is no single magic bullet against BDS” and it had previously been defeated through public exposure of its ugly agenda, resolutions condemning it in Parliament and support from other communities and groups.

“Federal governments in Australia have for a range of reasons previously been opposed to introducing legislation that is directed against boycotting Israel specifically,” he noted.

“If that attitude should change, we will of course work with the government to ensure that any such legislation does not backfire and is as effective as possible.”

Saying he believed it is a federal not a state issue, Jewish Community Council of Victoria president Daniel Aghion said the state roof body “agrees with and endorses the statement of the ECAJ”.

Zionist Federation of Australia president Jeremy Leibler noted that while no state or federal government should provide funding to organisations that support BDS, “This can be achieved through a variety of ways and would not necessarily require legislation.

“What is clear is that we must continue to win the hearts and minds of the Australian public whose values are anathema to those of the BDS movement,” he added.

“I am heartened by the response of the vast majority of Australians who have no interest in this extreme and toxic movement’s agenda.”

He added, “AIJAC’s long experience makes it clear that doing this requires a varied tool kit of responses, and we would certainly be interested in examining and helping advance any constructive legislative proposals prohibiting the implementation of BDS in the light of changing political realities.”

However, he noted, “While Australian bipartisan resolutions condemning BDS prevail, despite some welcome political support, there are currently few realistic prospects in Australia for such constructive legislation, which would have to be very carefully considered to ensure it is effective and not counterproductive, such as allowing BDS supporters to falsely pose as free speech martyrs.”