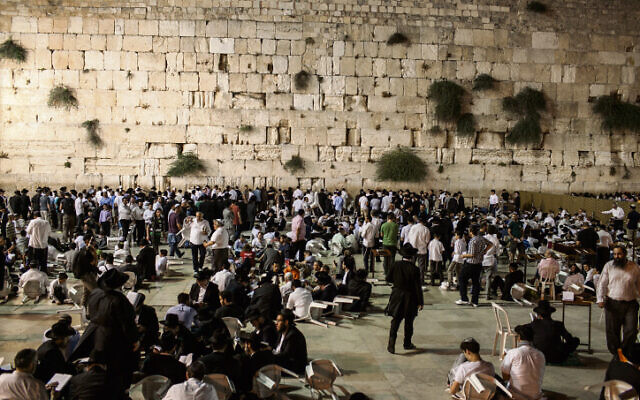 Orthdox Jews men pray as they gather for the ritual of Tisha B'Av at the Wall Western in the Old City of Jerusalem, July28, 2012. The Tisha B'Av ceremony, literally the ninth day of the month of Av in the Hebraic calendar, is the darkest day in the Jewish calendar, marking the destruction of the two temples, first by the Babylonians in 587 BC and later by the Romans in 70 AD. Photo by Noam Moskowitz / Flash90.

“And (after the 12 spies returned to Israel in the desert, and the majority advised against entering the land) the people cried on that night (Bamidbar 14:1). Said Rabbah in the name of Rabbi Yochanan: That night was the night of Tisha b’Av. The Holy One Blessed be He said to them: ‘You cried a cry for nothing – and I will fix this date for you to cry for generations.’” (Ta’anit 29a).

They had cried because they did not wish to enter the land. And indeed history would show that on that very same night of the year, generations of Jews would cry because Israel was expelled from its land – and because of so many other catastrophes that would strike a nation homeless since that expulsion.

States the Mishnah in tractate Ta’anit (4:6): On Tisha b’Av it was decreed upon our fathers that they should not enter into the land; and the first Temple was destroyed by the Babylonians; the second Temple was destroyed by the Romans; in 135CE (after the Bar Kochba revolt) the great city of Betar was captured (with tremendous loss of life, as well as signalling the end of the bid for renewed independence); and a year later by Hadrianic decree the city of Jerusalem was ploughed over by the Romans (who established a new non-Jewish city Aelia Capitolina in its place above the ruins).

But neither the end of the Roman persecutions nor the close of the era of the Talmud meant the end of the tragic history of Tisha b’Av. Fast-forward to 1492, and just as Columbus set sail on his epic journey, the golden era of Jewish life in Spain was coming to a close. Under the influence of fanatical elements in the Catholic Church, Jews were ordered by Ferdinand and Isabella to convert or to leave. And leave so many did – by the final extended deadline which coincided with Tisha b’Av of that year.

And though so often cited in regard to continuation the sad history of this date during millennia of exile, that event was by no means the end of the tragic history of Tisha b’Av.

On June 28, 1914, Archduke Franz Ferdinand, heir to the Habsburg throne, and his wife were assassinated at Sarajevo. When Serbia would not cooperate in seeking those responsible, Austria declared war on Serbia exactly one month later. Two days later, Russia began mobilisation, Germany demanded a stop to preparations on the German frontier. The ultimatum was ignored and on August 1 1914 – Tisha b’Av – Germany declared war on Russia.

The “war to end all wars” had begun – and thus were set in motion the events that brought Hitler to power and effectively culminated in the Holocaust. And even in regard to the Holocaust itself – which at its peak spanned three to four years of unprecedented murderous excesses carried out each day of those years – Tisha b’Av (June 22) of 1942 stands out as the day when the first transports rolled towards Treblinka from the soon-to-be-liquidated Warsaw Ghetto. Just a year earlier, on August 2, 1941 that was also Tisha b’Av, SS commander Heinrich Himmler had formally received approval from the Nazi Party for “The Final Solution”.

In both this specific context and in accordance with the practice of remembering all tragedies of our history on this date, many communities have made Tisha b’Av a day on which the Holocaust is religiously commemorated. To the lengthy list of Kinnot recited on Tisha b’Av morning and covering events from the Destruction to the Middle Ages have now been added compositions in the same style as the originals, but describing the horrors of the Holocaust

Following the establishment of the State of Israel in 1948, and particularly after the recapture of Jerusalem in 1967, many queried the relevance of Tisha b’Av in the contemporary era. In particular, after 1967 Jerusalem had ceased to be a city deserted and in mourning – as per the description found in Megillat Echah (Lamentations) and other portions of the liturgy prescribed for Tisha b’Av. Regrettably, however, it is clear that even in independent Israel we are still not masters of our own destiny. Even amid our triumph, pain and suffering have continued.

Before Yom Ha’atzmaut we commemorate Yom Hazikaron – and it was only as this year I attended the ceremony on that day at the Har Herzl military cemetery that I realised that the total number of 24,068 listed as having fallen in all Israel’s wars and owing to terrorism by Yom Hazikaron 2022, equals almost half the Jewish population of Melbourne or Sydney!!! And on Yom Ha’atzmaut, the very next day, three more were murdered in El’ad. At the very moment that news came through I was attending a concert in the Great Synagogue featuring the renowned chazan Yitzchok Meir Helfgott that was cut short out of respect for the victims. But I thought that here was no greater example of the reality of Naomi Shemer’s famous composition: “Al hadvash ve’al ha’okets, Al hamar ve’hamatok”. Life in Israel encapsulates “the honey and the sting, the bitter and the sweet …” Tisha b’Av in our generation reminds us that no matter how much we might celebrate the sweetness of modern Jewish life, we cannot ignore the bitterness and stings that have characterised (and sadly may even continue to characterise) our history

The Talmudic texts prescribed for study on Tisha b’Av emphasise that the causes of the original destruction, as a result of which we are still in exile, included strife between warring parties and what is generally termed “sin’at chinam” – baseless hatred and conflict. As we as a unified nation share the pain, and, I might add, even as we move to what looks to be a bitterly fought election, let us also seek “ahavat chinam” – love beyond reason – with which we can move beyond these difficulties to the final redemption bimhera beyamenu, speedily in our days. For as tradition tells us, even as the Temple was destroyed on Tisha b’Av so also was the Mashiach then born.

Shabbat shalom,
Nechama bekiflayim
(May our comfort be doubled as per Isaiah 40:1 – Nachamu nachamu ami)
Yossi