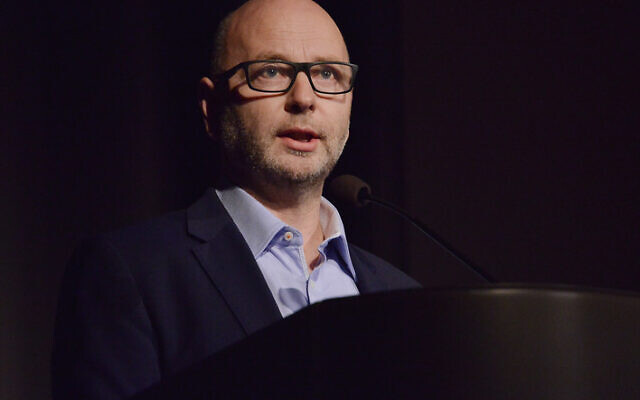 USC Shoah Foundation executive director Stephen Smith will be the keynote speaker at Kristallnacht commemorations in Sydney and Melbourne.

DR Stephen Smith is packing his bags for Australia, although he has just returned to the US from interviewing Kurdish refugees in Iraq who fled Turkey’s invasion of northern Syria.

The executive director of the University of Southern California Shoah Foundation, created by Hollywood director Steven Spielberg in 1994, will headline Australian Kristallnacht commemorations this month.

Smith, who comes from Britain, recalled a family visit to Israel as a teen to see Christian holy sites. Visiting Yad Vashem instilled in this budding theology student the zeal to later found the UK Holocaust Centre.

The Kurdish refugees he spoke to were “ripped out of their homes in the night, leaving their livelihood and their money behind, and we see them turning up [in Iraq] as statistics”.

But Smith said just as pre-World War II British prime minister Neville Chamberlain cast the betrayed Czechs as a nation marginal to the interest of Britons, so the Kurds are now portrayed (notably by US President Donald Trump) as a peripheral people, over whom not too many tears need be shed. In the West’s attitude to the Kurds, Smith hears echoes of the Evian conference of July 1938, where the nations generally spurned Jewish refugees, hinting to Germany that its Jews were fair game, and paving the road to the Kristallnacht pogrom.

“People say to me it wouldn’t be possible for the Holocaust to happen now because we have 24-hour news,” he said, “and my view is we would just watch the Holocaust in slow motion.”

Asked how far we can go in juxtaposing other world events with the Holocaust, a thorny issue at times, Smith was adamant: “The only way you can go about [commemorating the Shoah] is that we all have to be universalists.”

Shoah Foundation research has revealed how actively Jews under Nazi rule resisted the terror of Kristallnacht. “We rattle off the statistics of Kristallnacht and we view the images taken by Nazi cameras and that’s become the boilerplate. But when you see the testimonies, it’s the same story but from inside the house … how they reacted when the knock came on the door … parents telling their children to go out on the street, mix in with the crowd because you’ll be safer there than inside the house.

“None of them had experienced [an event like Kristallnacht] before, yet many around [Germany and Austria] did the same thing. Testimonies of survivors show what the Jews really did to protect themselves that night – remarkable acts of courage.”

Dr Stephen Smith will give an address, “The Courage to Speak”, the 2019 Betty and Shmuel Rosenkranz Oration, during a Kristallnacht commemoration hosted by the Jewish Holocaust Centre at St Kilda Town Hall on Sunday, November 10, 7pm.

He will address the Kristallnacht commemoration at the Sydney Jewish Museum on Thursday, November 14, 6.30pm.