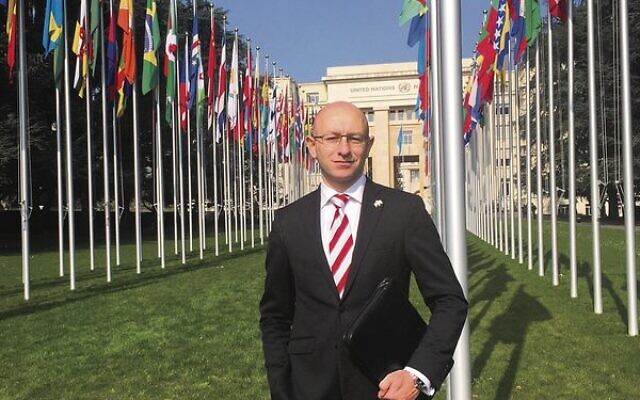 Arsen Ostrovsky at the UN Human Rights Council in Geneva.

Australian oleh Arsen Ostrovsky has been named by US Jewish media outlet Algemeiner as one of the “Top 100 People Positively Influencing Jewish Life”.

Sydney-raised Ostrovsky, who made aliyah in 2012, is the CEO of the International Legal Forum, a not-for-profit group bringing lawyers and activists together to “promote justice, peace and equality in Israel and the Middle East”.

“As one of the most prominent voices in the pro-Israel community and experts on international law, Arsen regularly addresses the UN Human Rights Council, and speaks before parliaments across Europe and audiences in North America,” Algemeiner said. “He also has a digital media reach in the millions of users on Twitter alone.”

Ostrovsky said he was “deeply and profoundly honoured and humbled” by the recognition.

“I have always considered making the case for Israel not only a privilege, but the highest of duties. Likewise, our obligation to combat antisemitism,” he said.

“[I’m] incredibly thankful to our team at the International Legal Forum, for providing such a meaningful platform to make a difference and couldn’t be prouder to have my name mentioned alongside some incredible leaders, like Sebastian Kurz and Enes Kantor, heads of Israel’s security services, and many of my colleagues who are in this fight every day without fail.”

In 2018, Ostrovsky was awarded the Nefesh B’Nefesh Bonei Zion prize for Israel Advocacy.