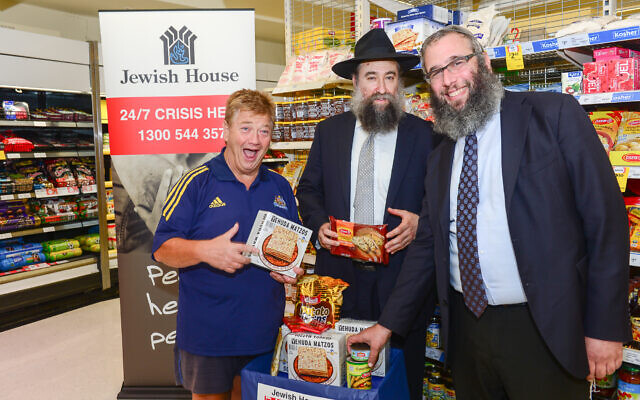 “HE always loved chatting about his Jewish heritage back in London and would always make himself available to help us at Jewish House.”

Sydney’s Rabbi Mendel Kastel has paid tribute to Australian radio and television icon Jonathan Coleman, who passed away at Wolper Jewish Hospital last week after a four-year battle with prostate cancer. He was 65.

Coleman, who grew up in a Jewish home in London and moved to Australia when he was seven years old, had been found to have had the cancer-causing BRCA2 gene mutation as a result of his Ashkenazi Jewish ancestry.

Stating, “My parents went through World War II in London and humour is a way of coping,” Coleman joked, “Oldtime Londoners might say, ‘Well, the weather’s bad today but at least we’re not being bombed by the Luftwaffe.'”

He was awarded a Medal of the Order of Australia (OAM) in 2015 for his service to the broadcast media industry, and to the community.

“It’s nice to be recognised for telling a bad joke at a charity event or helping kids’ charities, but there are worthy people in every community and I always think it is the ordinary people that are recognised for bravery awards that are more important – like the cab driver saving a life,” a humble Coleman told The AJN at the time.

Speaking about his Jewish ancestry, Coleman said, “A lot of my relatives in London were a lot more Jewish than our family and I remember going to my fair share of bar and bat mitzvahs, but I ended up marrying a Church of England girl and religion isn’t very important in my life.

Describing Coleman as “a true media star but also a generous friend of Jewish House”, Rabbi Kastel – the organisation’s CEO – said, “I will miss his humour and willingness to help where he can.

“We loved doing the Rabbi Pickle show on Studio 10 and launching our Coles Passover drive at his local Coles.

“We wish long life to his dear family and we know that all his friends here and around the world will miss him.

“May his memory be a blessing and a source of inspiration to all.”

Coleman rose to fame on Network Ten’s Simon Townsend’s Wonder World in the 1980s and as co-host of radio show Jono and Dano and Saturday Morning Live alongside Ian Rogerson. A regular on Nine Network’s Mornings with Kerri-Anne, and Seven Network’s Sunrise, he was also a successful radio presenter in the UK during the 1990s and early 2000s.