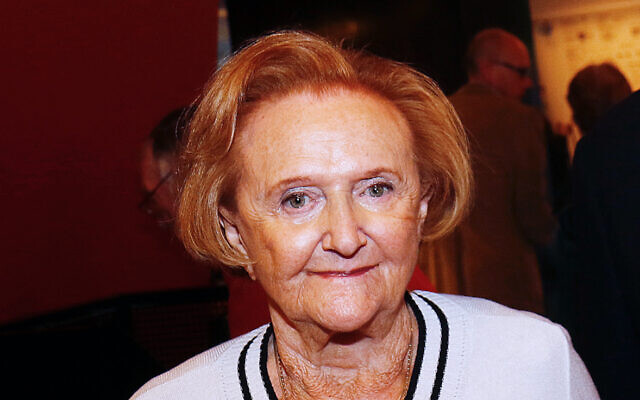 TRIBUTES flowed this week after the passing of philanthropist and community icon Eva Besen.

Born in Poland in 1928, she moved with her family to Melbourne and later married Marc Besen – who arrived after World War II, and later became a retail titan – while her brother John Gandel became a well known property developer. The Gandel and Besen families would become formidable names in Australian philanthropy, within the Jewish and wider communities, and in Israel.

United Israel Appeal Victoria president Hayley Southwick and her executive this week described Eva, who founded UIA Victoria’s Women’s Division and served as its president from 1986 to 1989, as “a stalwart supporter of Israel and the people of Israel”.

At Mount Scopus Memorial College, home of the Gandel and Gandel Besen House campuses and the Besen Family Performing Arts Centre, a spokesperson said, “We are deeply indebted to Eva, whose passion and support for Mount Scopus and its students knew no bounds.

“Eva was a loyal and longstanding supporter of the school for 60 years, a past parent and grandparent and a true friend of the college. At the time Eva first became a parent of school-age children, Scopus was still in its early days. Eva was respected and admired for her steadfast advocacy for the school as it sought to establish itself in the community.”

The Besen Family Foundation’s commitment to Israel saw it funding a range of projects, including the establishment of a high school and high-tech hub in the Negev. In Australia, it funded everything from Alzheimer’s research, to the Jewish Holocaust Centre, Bialik College, and arts projects.

Unassuming and keeping a low profile, Eva was a quiet achiever on many fronts.

The mother of four was a key figure in the Besen Family Foundation, a cornerstone of Jewish communal life in Australia and Israel, and in the wider Australian community, for four decades. She received an AO for services to the community.

Born in 1928, she arrived in Melbourne from Poland with her mother Fay Gandel, who opened a small lingerie shop in 1939. Eva met Marc Besen after he arrived in Australia from Romania in 1947, and the couple lived in St Kilda. Eva recalled her grandfather Joseph Fisher – who had moved the family from Carlton to Elwood in the early 1930s – starting a regular minyan in the family home, and she told anecdotes of the men gathering for Shabbat and for chagim, and the women of the house serving food in the family succah.

Marc would later be recognised with an AC for his philanthropy, after becoming one of Australia’s foremost retailers. He co-founded the Sussan fashion chain with Eva’s brother John Gandel.

Eva and Marc visited Israel in 1958 – and as the couple recalled – a conversation with then prime minister David Ben-Gurion sparked their abiding interest in the future of the Negev.

In 2018, it triggered the Besen Family Foundation’s funding to establish the first high school and a high-tech hub in Ramat HaNegev, as part of its 40th anniversary grants program.

The program also included support for the Alzheimer’s Research Clinicians’ Program at Melbourne’s Walter and Eliza Hall Institute, the redevelopment of the Gallery of the Permanent Museum Display at the Jewish Holocaust Centre in Melbourne, introducing Australia’s mental health initiative RUOK Day to Israel with a local partner, support for the new early childhood learning centre at Bialik College, and the redevelopment of Polyglot Theatre’s headquarters at the Abbotsford Convent.

Three years ago, the Melbourne Symphony Orchestra presented the couple with life memberships to acknowledge and celebrate their enduring commitment to the orchestra. Accepting the memberships, Marc reflected, “Eva and I believe that a vibrant and well-supported arts sector is vitally important for the health of our city.”

In 1979, Eva and Marc purchased TarraWarra, a property in the Yarra Valley, initially as a family retreat, but later helped develop it into a well known winery and arts precinct, establishing an art gallery housing 500 works, the largest collection of privately held Australian art in the country.

Eva is survived by Marc, by her children Naomi, Carol, Debbie and Daniel, and by her brother John Gandel.