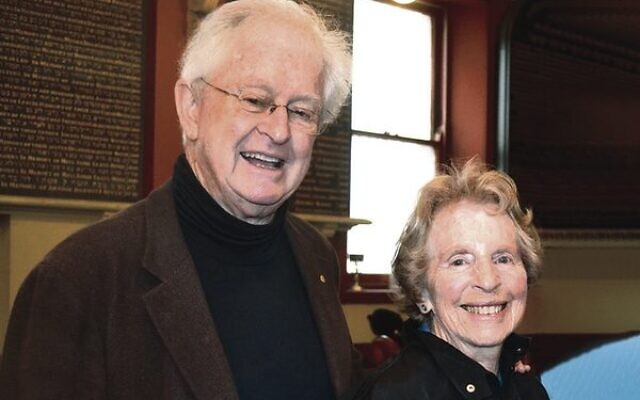 DR HOWARD Freeman’s passion for preserving Australia’s Jewish communal history was just one aspect of a multi-faceted life remembered by communal leaders after he passed away last week.

Freeman, 81, was president of the Australian Jewish Historical Society Victoria (AJHS) for 38 years until 2020. His concerted effort to keep the archives of Melbourne’s Rabbi Joseph Lipman Gurewicz in Australia made headlines in the 2000s.

Born in Wales in 1940, Freeman came to Australia with his parents, studying at the University of Melbourne and practising as a dentist.

As president of Temple Beth Israel (TBI) in 1997-98, he coordinated with AJHS to commission A Portion of Praise, a celebratory volume in honour of emeritus Rabbi John Levi. He played a central role in TBI’s 75th anniversary history, A Time to Keep, and presented a priceless archive of Victorian Jewish writings and records to the State Library of Victoria, continuing to expand it for several years.

In a eulogy at Freeman’s funeral on Friday, Rabbi Fred Morgan, a TBI emeritus rabbi, said, “Howard had a great gift for enlisting others in his passion, commissioning outstanding speakers and authors for the AJHS and its journal. In recognition of his work, Howard received the Medal of the Order of Australia in 2007. This brought him great pleasure.”

Freeman’s attempt to keep in Australia the comprehensive archive of Melbourne’s Rabbi Joseph Lipman Gurewicz was one of his greatest struggles. The Lithuanian-born rabbi had made commentaries on many matters relating to Judaism, reflecting the issues confronting Melbourne Jewry from the 1930s to 1950s. However, a New York purchaser removed much of the material on the Holocaust, rabbinic communications to Lithuania and the Holy Land, and material on the Dunera, selling the remainder at auction to the Jewish Museum of Australia in 2008.

“Howard lived an extraordinarily full and varied life, a life truly worthy of celebration,” said Rabbi Morgan. “He also made remarkable contributions to the life of the Jewish community in Melbourne and indeed across Victoria and Australia, through what one of his associates called his ‘inspirational enthusiasm’ for its history and his passion to preserve that history for future generations.”

Fourteen past presidents of TBI this week jointly stated, “During his presidency, TBI developed and grew in numbers, and he passed on to his successors a happy and efficiently run organisation … TBI salutes one of its champions and we mourn the loss of our friend.”

Freeman is survived by his wife Lorraine, his children and grandchildren.