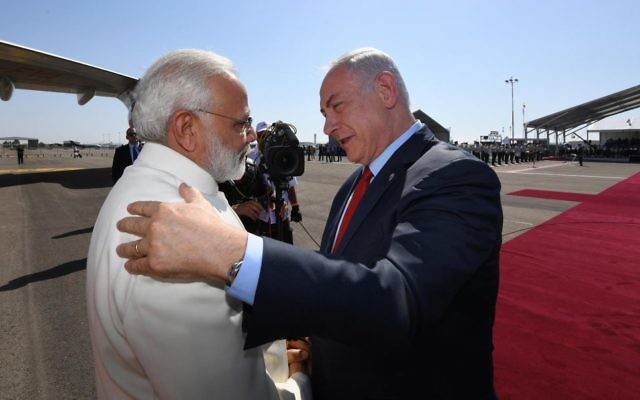 THE staggering transformation of India from Israel critic to firm friend was completed this week, with the first ever visit of an Indian Prime Minister to the Jewish State.

Most international visitors go to the West Bank to see Palestinian leaders when they visit Israel, but India’s Prime Minister Narendra Modi decided not to visit Ramallah and focus all his time on Israel.

“India–Israel ties have seen rapid growth over the last several years,” said Modi, who was elected in 2014 and has overhauled the relationship. “The people of Israel have built a nation on democratic principles … and converted challenges into opportunities,” he declared, adding: “India applauds your achievements.”

Shalom Wald, author of a new book India, Israel and the Jewish People told The AJN: “I don’t think there was any visit to Israel of this importance in the last few years apart from Trump.”

Wald said that while many world leaders visit Israel and discuss improved ties, no relationship has undergone the kind of u-turn seen in the Israel–India relationship. “India was known to be a staunchly hostile country, supporting all Arab countries, but it started to mellow, and with Modi it has culminated in a 180 degree change.”

Israel’s Prime Minister Benjamin Netanyahu made sure that Modi knew he considered the visit to be an important one. He met him at Ben Gurion Airport, and greeted him saying: “Prime Minister, we’ve been waiting for you a long time. We’ve been waiting almost 70 years in fact because yours is truly a historic visit.”

Netanyahu told Modi, “When I first met you at the United Nations three years ago, we agreed to break down the remaining walls between India and Israel. We shook each other’s hand and we agreed to forge a historic partnership for progress.”

During his engagements, including dinner with the Netanyahus, Modi discussed the general Israel–India relationship, and talked about defence and technology, saying that ties will deepen.

He said: “Our focus on using technology and innovation to meet our development priorities provides productive scope to expand academic, scientific research and business links.”

He showed special interest in Israeli agricultural innovation, which is in demand in India, and visited a flower farm.

Modi also went to Yad Vashem, which he called “a poignant reminder of the unspeakable evil inflicted generations ago as it is a symbol of the endurance and fortitude of the Jewish people”.

He wrote in the guest book that it serves as “a mirror to society around the world” as people today deal with “conflict, intolerance, hatred and terror in our time”.

The author Wald, senior Fellow at The Jewish People Policy Planning Institute, said that the big change in India’s attitude stems from Modi’s personal admiration for Israel, and from many Indians concluding that dedication to the Arab world wasn’t serving their interests.

“Indian diplomacy discovered in spite of how loudly it condemns Israel at the UN, Arab countries would always favour Pakistan, and people began to say, ‘why the hell are we doing this?’”

Wald suggested that India became less concerned about offending Arab states and found that they actually began to respect India more and relationships between India and Arab states actually flourished.

“Relations with the Arab world and Iran increased tremendously,” he noted, adding that Modi has also become more prepared than predecessors to discount reactions of Indian Muslims when deciding policy towards Israel.

Is the Indian u-turn tied to Modi, to a point that a leadership change in India could undo the progress? “No,” said Wald. “Because he came to power with support of a western-oriented middle class that doesn’t care about the Palestinians.”