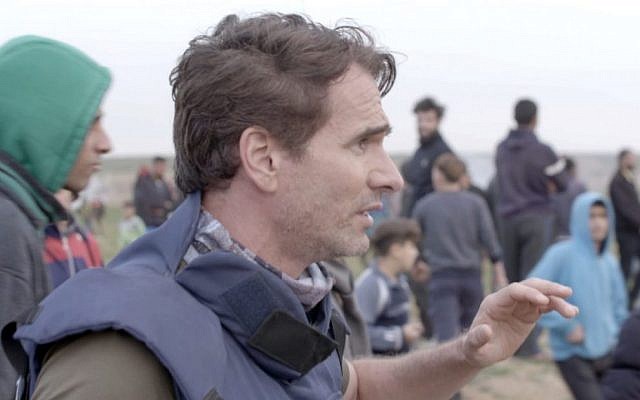 TODD Sampson is a former top advertising executive who certainly knows the importance of creating “buzz” to help launch a new product.

Launching series three of his TV show, Body Hack, with an episode partially filmed on a mini camcorder at the Gaza–Israel border during one of Hamas’ weekly demonstrations is a sure-fire way to create buzz.

But in this week’s episode, the buzz came at the expense of the truth. Sampson presented a sensational, but entirely one-sided portrayal, of the political situation in Gaza. His errors were factual and also errors of omission.

It is important to note that the show does not claim to be a news or current affairs program. Rather, Sampson’s objective is to experience life in varied communities around the world to see how far the human body can be challenged.

It needs to be judged for what it is – entertainment for a commercial TV audience. It was not an accurate analysis of one particularly contested zone in a highly complex region.

So what did Sampson do right and what did he completely overlook?

Sampson provided unique access to a range of Gazan characters who provided a fascinating insight into their respective situations.

From the young children who told him that if they met an Israeli, “We would kill them because they are Israeli. We want to kill them. We want to liberate Jerusalem,” to the Palestinian Islamic Jihad fighter who admitted he is armed by the Islamic Republic of Iran.

From the grieving mother of a young man killed after protesting along the border, to the surgeons treating bullet wounds. The Gazan population was broadly reflected.

However, not a single Israeli was interviewed during the entire show. No attempt was made to understand the psyche of the “other side”.

In fact, what Sampson completely overlooked was context.

Throughout the show, he failed to acknowledge that just as Israel has sealed its border crossings with Gaza to maintain security and only allows limited passage for goods and people, so too has Egypt.

When Sampson lamented the difficulties that electricity shortages create for neonatal patients in Gazan hospitals, he failed to mention the nearly 55,000 medical permits issued to Gazans to enter Israel for treatment in 2018. He also did not mention that Gazans themselves vandalised fuel pipelines at the Kerem Shalom goods crossing last May which further restricted electricity production while the pipelines were being repaired.

Another important contextual element missing from the episode was Sampson’s failure to properly acknowledge the violence and terror perpetrated against Israel over 12 years of Hamas rule.

While he acknowledged Palestinian Islamic Jihad’s suicide bombing spree during the Second Intifada, little was made of Hamas’ similarly violent tendencies. No mention of Gilad Shalit’s five-year hostage ordeal, no mention of the regular rocket attacks on Sderot and surrounding communities.

Sampson gave the briefest of credits to Hamas for its approximately 12,000 rocket attacks on Israel, but then went on to describe 2014’s Operation Protective Edge in great detail. He remembered to condemn Israel’s bombing of a school, but forgot to mention that the United Nations itself had admitted Hamas had been keeping military goods beneath schools.

His narration did not acknowledge Hamas’ refusal to recognise Israel’s right to exist or its refusal to disavow violence against Israelis.

In fact, Hamas leader Mahmoud al-Zahar said that calling the campaign “peaceful resistance” was done in order to “deceive the public”. One social media post from demonstration organisers showed maps marked with the shortest route to Israeli border towns, while another called for those who managed to breach the border to “murder, slaughter and burn and never show any mercy”.

Of course, anyone can say what they want on social media, but even Gazan leadership admits the objective of the demonstrations is to obliterate Israel. Hamas leader Ismail Haniyeh declared ahead of the May 2018 clash, “Palestine and Jerusalem belong to us. We will break the walls of the blockade, remove the occupation entity and return to all of Palestine.”

Sampson correctly acknowledges many Gazans live a life without hope and that this lack of hope has a serious negative impact on their physical and mental health.

He overlooks the fact that ordinary Gazans are ruled by despots and that democracy is a pipedream for Gazans. It has been 13 years since elections were held.

In March this year, when a few brave Gazans tried to object to Hamas-imposed tax increases, Hamas’ security forces responded with beatings, arrests and imprisonment, according to Human Rights Watch. Rather than acknowledging the genuine grievances of its citizens, Hamas blamed its factional rival Fatah for fermenting dissent.

But that is just the tip of the iceberg. For over a decade now, Gazans have been used as human shields by Hamas’ security forces with military sites embedded in residential areas.

Body Hack‘s Gaza episode created plenty of buzz, it is just a shame that truth was the collateral damage.

Naomi Levin is a senior policy analyst at the Australia/Israel & Jewish Affairs Council.