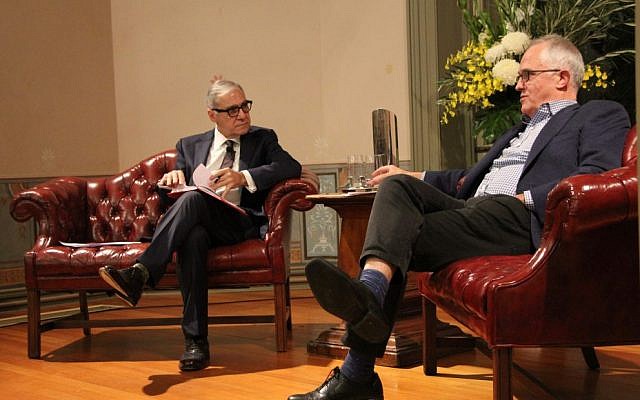 PRIME Minister Scott Morrison showed “a patronising insensitivity” and a “complete misunderstanding” of the Australian Jewish community on the eve of the Wentworth by-election, according to former prime minister Malcolm Turnbull.

Speaking for the first time since new details about last year’s leadership change were revealed in last week’s Sky News documentary, Turnbull blasted the decision of the man who replaced him in the top job at a Friends of Wolper Jewish Hospital event.

He said the government’s announcement on the eve of the Wentworth by-election to consider moving Australia’s embassy to Jerusalem was “a really dumb thing”.

“Whatever your views on the merits of that, I thought the timing was just calculated to win support … It showed a patronising insensitivity to the Jewish community,” commented Turnbull.

“We all do dumb things in our lives, so do governments and politicians.

“Personally, I think the government’s position on that, to leave the embassy where it was, and not change the position, was the right one.”

Coupled with other “crazy things” the government did immediately prior to the Wentworth by-election, Turnbull believes the Liberal Party snatched defeat from the jaws of victory in the home stretch.

“My view is that the election was lost in the last week … My prediction was that Dave [Sharma] would’ve won it by pretty much the margin he won at the general election.”

Taking aim at the right-wing elements of the Liberal Party who successfully conspired to overthrow him as PM, Turnbull stated they “essentially operate as terrorists”.

“I’m not suggesting that they kill, but I’m being deadly serious here … What that group has done in the Liberal Party – and it’s one of the fundamental problems the Liberal Party has – is over quite a long period of time, they have regularly threatened to, and in fact, have been prepared to blow the government up,” Turnbull remarked.

Defending his decision to refrain from involvement in the Wentworth by-election, Turnbull commented, “I did not think that it was even remotely in Dave’s interests for me to be around.”

He emphasised, “I gave Dave my support, everyone knew I endorsed him. In fact, I think it’s publicly known that the powers that be at the Liberal Party tried to stop him becoming preselected and Lucy and I had enough residual influence to ensure that he was preselected.”

Asked whether he would have handled things differently in that fateful week of the leadership spill last year, Turnbull hesitated, “I don’t know, I mean, possibly. It’s hard to know.”

He went on to explain the series of events that unfolded, then remarked, “What [Minister for Finance Mathias] Cormann did was essentially damage the government so much, the prospects of recovering went from being quite a bit better than even money to being very, very challenging indeed.

“The week went on and having so much treachery, so much destructiveness, the good thing was that I was able to ensure that Morrison was my successor and not Peter Dutton.

Amid recent speculations around Turnbull having offered the deputy prime ministership to Peter Dutton, the former prime minister sought to set the record straight.

“Of course I did not offer him the deputy prime ministership. He had expressed an interest in it but it was not mine to offer … This is a complete and utter falsehood, and also an impossibility.”

Commenting on this year’s federal election results, Turnbull pointed to former opposition leader Bill Shorten’s lack of conviction, Labor’s tough plan for taxes, and the nation’s focus on Labor, as the primary culprits for the party’s defeat.

“The Liberal Party looked like a very disunited group, but ultimately I think in a sense that helped Scott Morrison to this limited extent; that in the election, everyone thought Labor was going to win, and so they focused on Labor’s policies, which were pretty unpalatable to many people, and they focused on Labor’s leader,” Turnbull remarked, adding that he believes Morrison has “done pretty good” as Prime Minister so far.