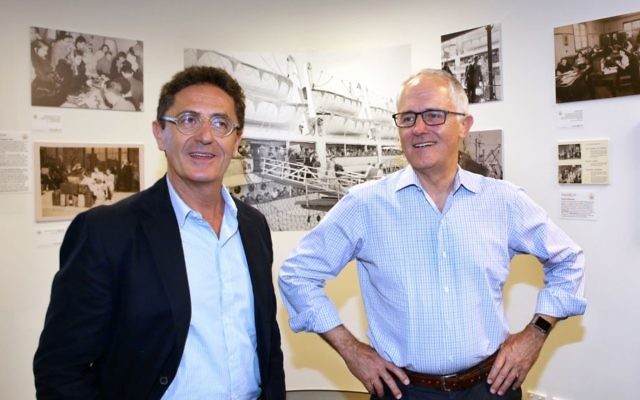 BEFORE delivering the keynote speech at JewishCare’s 80th anniversary celebration on December 11, Prime Minister Malcolm Turnbull was drawn to a displayed message of urgency sent from London in March 1936 to Sydney communal leader of that time, Samuel Sydney Cohen.

This chilling telegram requested an unprecedented level of assistance from Australia’s small Jewish population to help save German Jews, who were increasingly experiencing cruelty and persecution under the Nuremberg Laws.

Its immediate response by Cohen acted as a catalyst for the formation of the Australian Jewish Welfare Society, which later became JewishCare.

This was not lost on Turnbull, who began his address to the audience of more than 250 by referring to “this urgent call to action that was answered”.

“So many of your lives, or those of your parents or grandparents, were transformed by an extraordinary effort of leadership, but above all of love, by this organisation,” Turnbull, the Member for Wentworth, said.

“Philanthropy and a love of mankind is absolutely grounded and fundamental to Jewish ethical thought and practice.

“And the work that the 200 staff, 500 volunteers and the many donors and supporters have done here at JewishCare for 80 years is a testament to that.

“It is, on any view, the closest that we come to our very best.”

After offering his personal congratulations for the 80-year milestone, Turnbull quipped, “I always feel like being a part of a wider mishpocha whenever I come here!”

JewishCare president Allan Vidor described JewishCare’s story as “the story of our community”, and revealed how his own parents, both Holocaust survivors, were early recipients of its services.

“My father came here from Hungary in 1950 and my mother arrived from Poland in 1948 – both are here today and were helped by JewishCare,” Vidor said.

“My father remembers the warmth which he and 600 other Jewish passengers received when greeted by representatives of JewishCare on arrival by ship at Fremantle.

“In particular, he remembers a gentleman called Walter Brand, who was the general secretary at the time, who handed my father his first 10 pounds to help him along his way.”

Vidor said JewishCare’s start as a vital migrant welfare group – and its evolution into a cutting-edge, social and community welfare organisation that today helps more than 4000 people per year – is something all NSW Jewry can celebrate.

“JewishCare is a community asset of which all of us should be very proud.

“It helps people in most need in the areas of aged care, disability services, mental health services, and services to support children and families.”

NSW Attorney-General and Member for Vaucluse Gabrielle Upton praised JewishCare for its strong commitment to excellence and its continuing ability to adapt, evolve and innovate.