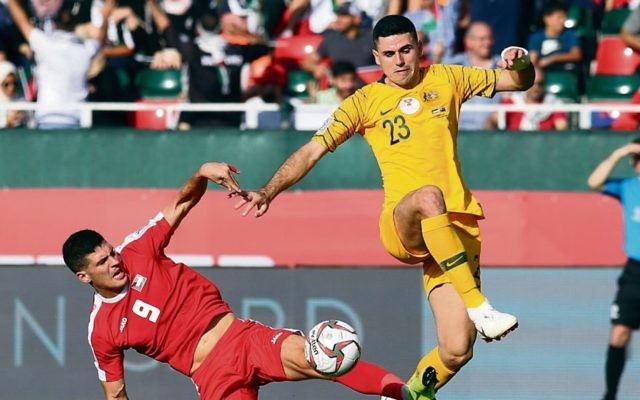 AUSTRALIA’S Asian Cup defence was finally set on the right path after a comfortable 3-0 win over Palestine in Dubai.

The Socceroos bounced back from their opening game loss to Jordan. The victory lifted Australia to second in their group, and their 3-2 win against Syria are few days later qualified them for the Round of 16 of the Cup.

While the on-field machinations will enthral Aussie supporters, I wonder if many will spare a thought to the geographic and political backstories of our qualifying group which were highlighted by the Australian Jewish Association (AJA) prior to the Palestine game.

As reported by SBS, the group urged the Socceroos to boycott the game against Palestine on the basis that Palestine is not a country recognised by the international community and that soccer has been “blatantly politicised” by the Asian Football Confederation admitting the Arab state as a member”.

There is no evidence that the AJA has widespread support in the Jewish community, and the call for a boycott was not echoed by other Jewish organisations.
The Palestinian team has been increasingly successful since their historic Asian Football Confederation (AFC) Asian Cup debut in 2015, and in fact at one time were ranked higher than Israel in the FIFA standings.

Palestine applied to, and was admitted into, FIFA in 1998. Along with disputed countries, Kosovo and Taiwan, they are included as special cases without the requirement for fully recognised independence. This is the crux of the AJA claim.

On the one hand, a Palestinian team is likely a source of great pride, and a potentially positive initiative in a region that rarely is the source of good news.

Caught between an often-violent conflict, poor leadership, corruption and constant restrictions, they have little to feel good about. A football team that represents their aspirations to statehood and provides both a positive rallying point as well as a distraction from their problems can surely only be perceived in a positive light.

“The national team is a source of pride, and it is competing at the Asian level. This confirms the progress of the level of our sport,” said Mohamed Sulaiman, a soccer coach in the West Bank city of Ramallah, to the Times of Israel.

Despite all that is good about a Palestinian football team, inevitably, it cannot separate itself from the politics that surround its existence. The team often encounters difficulties due to the political tension between it and Israel. Its players are subject to travel restrictions within Israel and the AFC has had to cancel fixtures in the past involving the team due to visa issues.

By the same token, the Israeli football team is also dogged by the politics of the Middle East.
Prior to last year’s World Cup, Argentina called off an exhibition match against the Israeli national soccer team that was to be played in Jerusalem, following pressure from Palestinian groups to cancel the game.

Perhaps the starkest reminder of the intercession of politics and sport is the geographic aberration of Israel’s membership of the Union of European Football Associations.

Until 1972, Israel was a member of the Asian Football Confederation. They won the 1964 Asian Cup in a reduced tournament on home soil (undermined by the pre-tournament withdrawal of 11 of the 16 intended participating countries) and came third when the competition was next held in Iran. But the same tournament embodied Israel’s problem. Every Arab state refused to play Israel. In the end, Israel was expelled from the AFC.

Since 1994, the national team and Israeli club teams have found a home in the European Association. Its membership continues to represent an anomaly in international football.

Sport has the ability to unite. Think of the achievement of the Socceroos’ fellow group competitors, Syria, in qualifying for the Asian Cup, and the potential their presence has to bring some much-needed joy into the lives of a nation that has suffered so much.

Recently CSKA Moscow midfielder Bibars Natcho made history by becoming the first Muslim to captain the Israeli national team, in a friendly fixture against Romania.

Arab players have made a significant contribution to the Israeli national team throughout the years. Two Israeli players – Tomer Hemed and Beram Kayal – one a Jew and the other a Muslim, are not only childhood friends, but also teammates for the same Premier League football team, Brighton & Hove Albion, as well as representing Israel together.

The AJA call for the Socceroos to boycott the match against Palestine, achieves little. Like the boycott, divestment and sanctions campaign, which is wielded against Israel, it serves to attempt to delegitimise, regardless of the positive backstory.

We need to encourage our Palestinian neighbours to pursue constructive avenues to achieve their aspiration for statehood. To encourage dialogue through the shared language and love for football offers a pathway.

The solution is worth it, whether it be the reinstatement of Israel to its rightful place in Asian Football or simply the Palestinian team’s ability to meet and play without restrictions on its players.

The power of football is a panacea to the many woes of the Middle East, and for that matter, the world. How fantastic if it could be part of the cure.

In the meanwhile, good luck to the Socceroos, well played to Palestine and bah humbug to those who called for a boycott.

DANNY HOCHBERG is a community stalwart with involvement in a number of communal organisations.