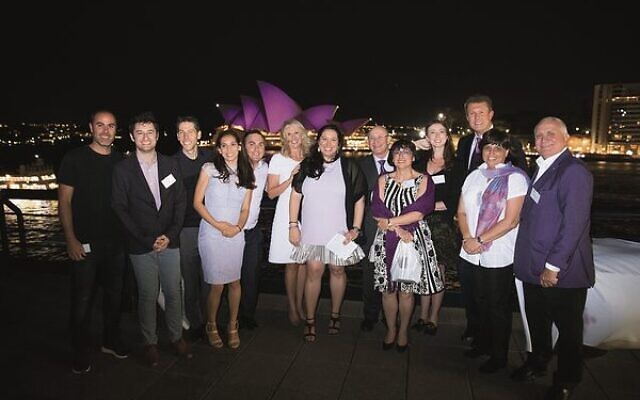 The #PurpleOurWorld team, ambassador Tracey Spicer and newsreader Peter Overton with the sails of the Sydney Opera House lit purple for WPCD.

THIS year, more than 4200 Australians will be diagnosed with pancreatic cancer. Almost 3400 will not survive.

In August 2014, Rochelle Goulburn, much-loved teacher at Moriah College for more than 30 years, passed away from the disease. Her family established #PurpleOurWorld, a social media movement dedicated to raising awareness for pancreatic cancer. It is a founding member of the Australian Pancreatic Cancer Alliance (APCA) and an inaugural member of the World Pancreatic Cancer Coalition (WPCC).

“The campaign is very personal this year, focusing on stories. It gives a voice to those silenced by the disease, like my mum,” Abelsohn said.

“The past two years have been heartbreaking around the world, but they have taught us just how valuable time is, which is something many families facing pancreatic cancer don’t have. We’re fortunate we had 16 months with mum. Many families have weeks.

“Many people don’t know the risk factors or the symptoms, so the disease goes undetected and untreated.”

Professor David Goldstein from the Sydney East Pancreatic Centre said, “The incidence in the Jewish community is higher than the general population due to the higher incidence of inherited mutations of BRCA, and mismatch repair genes associated with breast, colon cancer and also pancreas cancer in Ashkenazi Jews.”

The theme for the 2021 campaign, “It’s About Time”, focuses on the time we can be given if pancreatic cancer is detected early enough for better treatment options.

“Ultimately, it’s about knowing what to do if you find yourself experiencing the symptoms, which are often attributed to other less serious conditions,” Abelsohn explained.

“When you put back pain, stomach pain, unexplained weight loss, new onset diabetes or jaundice together, and these symptoms have been ongoing for a number of weeks, it may be time to see your GP.”

Genetic testing is available for those diagnosed with pancreatic cancer. According to Head of Department at the Prince of Wales Hospital Hereditary Cancer Centre, Dr Lesley Andrews, new drugs that specifically target cancers that have a genetic cause are now being used with promising results.

“Finding a genetic cause also has the benefit of alerting relatives who may be at unsuspected increased risk of other cancers,” she said.

Dr Andrews urges anyone with a family history of pancreatic cancer diagnosed in someone aged under 60 to ask their GP about a referral to the Hereditary Cancer Clinic.

To take part in the World Pancreatic Cancer Day campaign, dress in something purple on November 18 and share a picture on social media using the hashtags #ItsAboutTime and #WPCD.

Those who have been affected by the disease can share their story with the official WPCD campaign, by visiting worldpancreaticcancercoalition.org/world-pancreatic-cancer-day/stories2.

Jessica Abelsohn is an employee of The AJN.