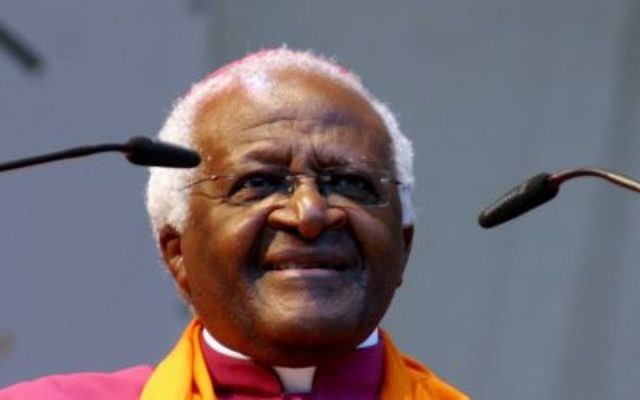 ARCHBISHOP Desmond Tutu may have helped South Africa bring about the end of apartheid, but his open support for Marrickville Council’s Boycott Divestment and Sanctions (BDS) campaign against Israel has left the Jewish community cold.

Archbishop Tutu sent a letter to the council, which rescinded its support for BDS in April,  because he said he wanted to pay respect to the councillors for trying to isolate Israel.

“Sometimes taking a public stand for what is ethical and right brings costs, but social justice on a local or global scale requires faith and courage,” Archbishop Tutu wrote in the letter to the Greens-led council.

Archbishop Tutu claimed to have a responsibility to be the voice of people across the world. “We in South Africa, who both suffered apartheid and defeated it, have the moral right and responsibility to name and shame institutionalised separation, exclusion, and domination by one ethnic group over others.”

But former South African apartheid activist and past president of the NSW Jewish Board of Deputies Robin Margo said Tutu was wrong.

“Archbishop Tutu was a hero in the struggle against apartheid. He gave courage to many people, including me, in dark times. But he is wrong about Israel,” Margo, now the president of the New Israel Fund Australia, said.

“There is discrimination in Israel, as there is in our democracy, but it is a gross distortion to describe Israel as practicing apartheid.”

When Marrickville Council voted to impose a boycott against Israel last year, leaders from the Liberal, Labor and even federal Greens parties came out in opposition to the policy and called on it to focus on local issues.

NSW Premier Barry O’Farrell even threatened to sack the council if it voted to impose the BDS policy.

However, when it was revealed the BDS policy would cost council more than $3.7 million to implement, it voted against it.

Receipt of the letter from Archbishop Tutu was announced on ABC television’s Q&A program on Monday night by Greens senator-elect and BDS supporter Lee Rhiannon.