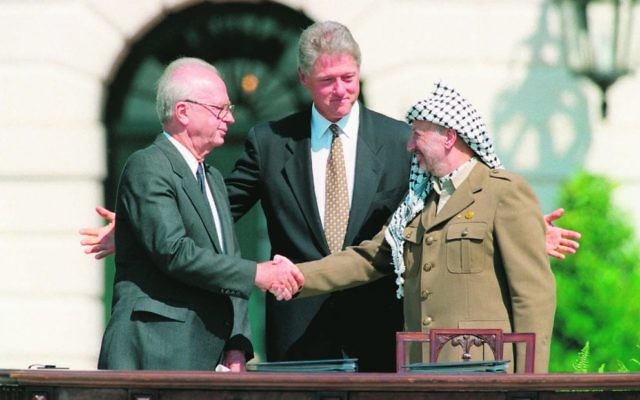 JEWISH community leaders in Australia have offered mixed reflections on the quarter century since the Oslo Accords between Israel and the Palestinians were signed in a ceremony on the White House lawn on September 13, 1993.

Executive Council of Australian Jewry co-CEO Alex Ryvchin said, “Oslo failed to deliver on its promise of a final-status agreement within five years, which has undermined belief in the two-state solution. But Oslo also saw a series of crucial undertakings on security cooperation, on territorial issues, and economic cooperation that have held to this day, and have in some cases expanded to the mutual benefit of both sides.

“As an optimist, I look at the preamble to the accords and am still moved by the promise to ‘put an end to decades of conflict … and achieve lasting peace and historic reconciliation’.

“These words may appear like platitudes today but they were revolutionary then. They should inspire leaders from both sides to be bold in the quest for an end to this conflict.

“But the realist in me cannot ignore that post-Oslo we have seen 1600 Israelis killed; Palestinian rejectionism thwart peace at Camp David, Annapolis and Taba; multiple wars and the carnage of [Palestinian Authority president Yasser] Arafat’s intifada; and the increasing internationalisation of the conflict, turning campuses, governments and civil society into battlegrounds.”

Australia/Israel & Jewish Affairs Council executive director Colin Rubenstein identified “some positive achievements of the Oslo era – even if much of that history has been violent and bloody, and peace still appears distant”.

“The Oslo Accords empowered Palestinians, allowing them to live under their own rulers and enshrining their right to self-determination in some form as the consensus policy of Israel’s major political parties, and internationally. Despite often intense debates, almost nobody in Israel supports a return to the pre-1993 status quo,” he noted.

Rubenstein saw Oslo’s other legacy as “25 years of lessons learned – admittedly often at a terrible price – primarily about the inability, unwillingness and unreadiness of the Palestinian leadership, and indeed, much of their society, to reach a stable and lasting two-state peace deal with Israel.

“Thus, any new moves toward peace must focus on achieving the significant transformations to Palestinian society, culture and governance that would make a lasting two-state resolution possible,” he said.

Rubenstein said that, given the last 25 years, it is not surprising that many political actors, inside and out of Israel, are now thinking “outside the box” about a post-Oslo way forward. “But however long it takes, or however it is achieved, the two-state-for-two-peoples paradigm – which Oslo made the consensus both in Israel and internationally – still remains the only possible endgame that is both sustainable and just.”

Describing the accords as “the Oslo tragedy”, Zionist Federation of Australia president Danny Lamm noted that despite early Israeli enthusiasm for the agreement, it resulted in “more than 1600 lives lost through terrorism”.

“Terrorists that were armed were enabled to enter Israel under the leadership of the infamous Yasser Arafat … The Oslo tragedy has set Israel back enormously. It failed to bring resolution to the Arab-Israel conflict.”

Lamm said Israel’s unilateral withdrawal from Gaza showed how far it was prepared to go for peace, “but giving up pieces of Israel to achieve peace is no guarantee for that outcome”.