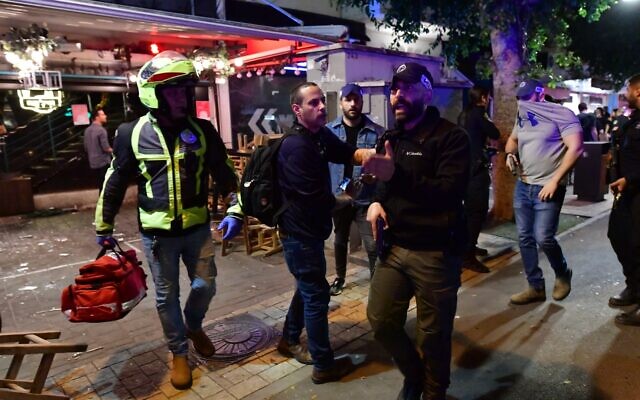 Police and rescue workers at the scene of a terror attack on Dizengoff street, central Tel Aviv. Photo: Avshalom Sassoni/FLASH90

UPDATE: The terrorist who carried out the deadly shooting attack in Tel Aviv overnight has been killed in a shootout with officers from the Yamam police counter-terrorism unit and the Shin Bet internal security service.

The man, who sparked a massive, hours-long manhunt after killing two and wounding more than 10 at a Tel Aviv bar, was found hiding near a mosque in Jaffa, the Shin Bet said. The agency says he was a resident of the Jenin district of the northern West Bank.

EARLIER: Two people were killed and several were wounded as a gunman opened fire on a bar in central Tel Aviv Thursday evening in an apparent terror attack, the latest eruption of violence to strike Israel in recent weeks.

The shooting took place on Dizengoff Street, turning an area normally crowded with people out for Thursday night at bars, restaurants and cafes lining the popular thoroughfare into a scene of chaos and panic.

As the street filled with ambulances and rescuers, police carried out searches for a gunman thought to have escaped, going door to door and telling people to stay inside and lock their doors.

The attack began when at least one gunman walked up to Ilka, a popular bar with a large outside seating section, and opened fire.

“We dove under the tables and people started crying, it was horrible,” said Evelyn Gertz, 34, who was having dinner next door.

Ten people were rushed to the nearby Ichilov Hospital with gunshot wounds, two of whom were later declared dead, the hospital said. Four others were listed as critical and were undergoing surgery, according to the hospital. Two were seriously injured, and two were mildly hurt.

Another four people with mild injuries were taken to Wolfson Hospital in Holon and Sheba Hospital at Tel Hashomer.

Police initially described the incident as a nationalistically motivated terror attack, though the identity of the attacker or attackers was not immediately known.

Later, Tel Aviv police chief Ami Eshed gave a more cautious assessment, noting that other avenues were being investigated as well. “From what we know there are signs this was terror,” he said.

A worker at Ilka told Channel 12 news that he saw at least two attackers, at least one of whom opened fire from a pistol. 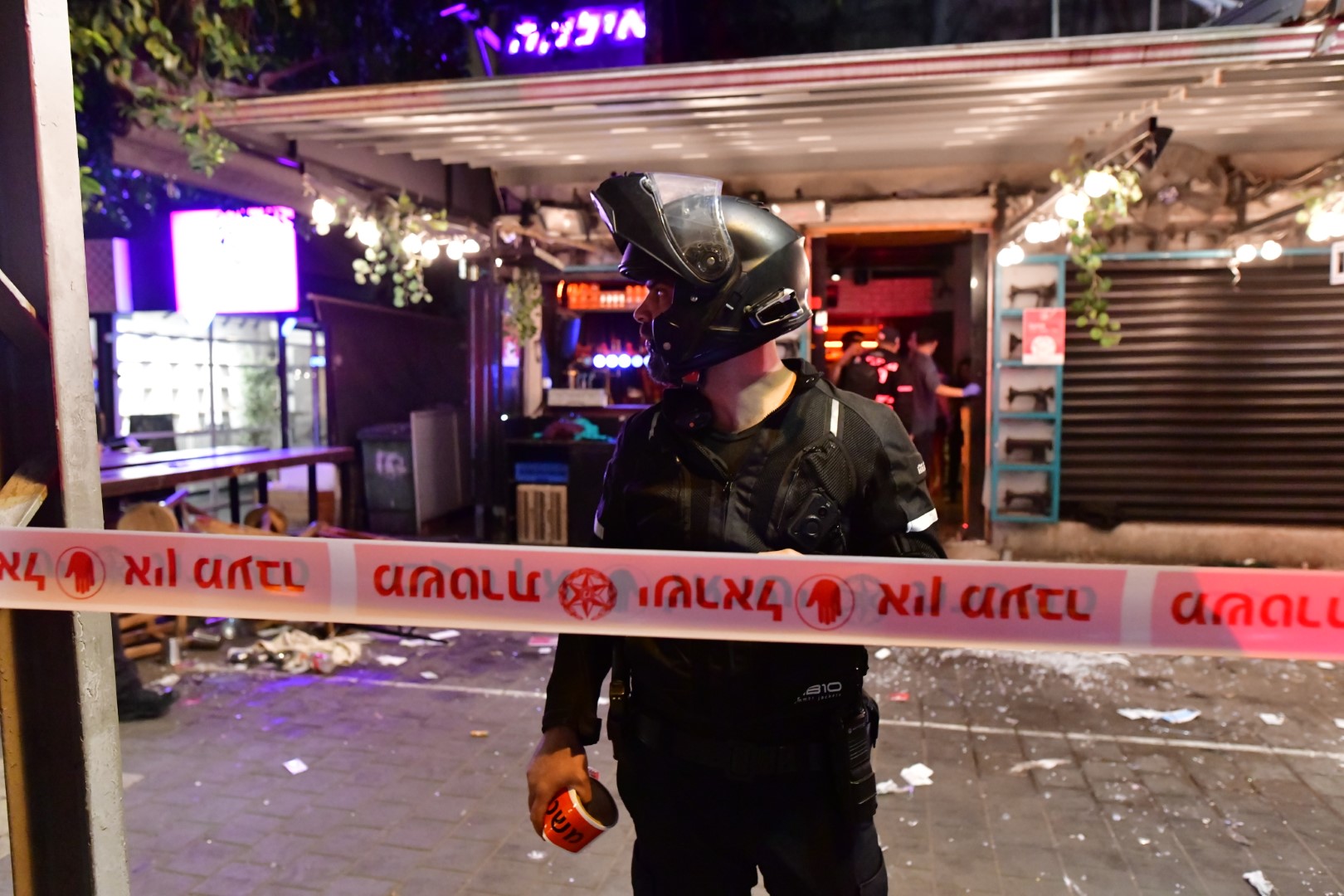 Police and rescue workers at the scene of a terror attack on Dizengoff street, central Tel Aviv. Photo: Avshalom Sassoni/FLASH90

Police told residents in the area to remain inside out of fear that a gunman or gunmen could still be on the loose. Police chief Yaakov Shabtai arrived at the scene of the attack and asked people to remain alert and report any suspicious individuals.

“Large numbers of forces are carrying out broad searches,” Police commander Rami Ben David told the media. He said people still out on the streets should return home.

A police spokesperson described the suspect as possibly thin person wearing a black shirt and black shorts, relying on a “blurry picture.” They said the person was likely armed with a pistol.

Taking part in the search were over 1,000 cops as well as officers from the Shin Bet, and military special forces, the spokesperson said. Public transportation in central Tel Aviv was shut down, and police reportedly set up checkpoints on highways leading from the city toward the West Bank and northern Israel.

Down the street from the scene of the attack, TV cameras showed dozens of officers and people in military uniforms gathered with guns drawn outside a building where a suspect was thought to be holed up inside. Moments earlier, a large explosion, apparently from a flashbang, was heard on live TV.With police telling people to stay off the street, people who ran into nearby apartments for shelter were continuing to hunker down there hours later.

Psychologist Ari Goldberger, 37, who was eating dinner nearby when the attack occurred, was in an apartment owned by an Italian couple with some 40 others, including children and an Australian tourist.

“We are just singing Tehillim (psalms). … The hosts are bringing pasta, drinks,” Goldberger said. “The hospitality is amazing. He just invited everyone to his house, next to the restaurant.” 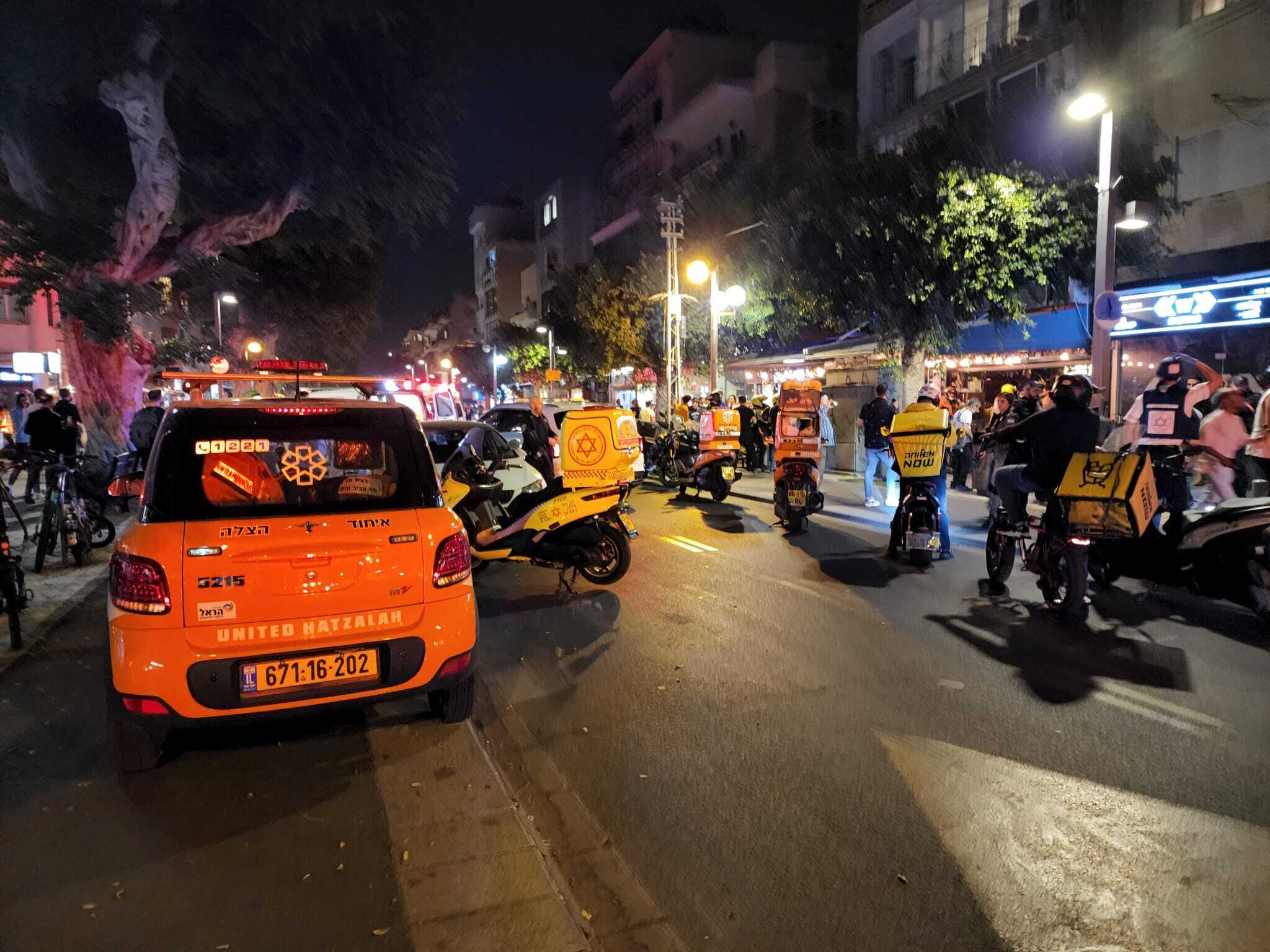 The attack was the latest to rock Israel after a string of shootings and stabbings in late March left 11 people dead in a single week, the deadliest outbreak of terrorist violence since 2006.

Bennett’s office said in a statement that officials had decided to continue deploying large numbers of forces to Tel Aviv.

Witnesses described chaos at the scene as the gunman fired at diners, with people out for a Thursday night — the unofficial start to the weekend — sprinting for cover amid panic.

The tour guide, hiding for shelter with others in the stairwell of a nearby apartment building, said he heard shots “ten meters behind me” and ran.

Security camera footage from the scene showed people at Ilka knocking over chairs and tables in a rush to get away.

Israeli leaders have raised fears of a fresh outbreak of Palestinian terror in recent weeks, and vowed to crack down while also attempting to avoid heightening Palestinian anger during the holy month of Ramadan.

The shooting broke a tense calm that had set in since March 28, when a Palestinian man opened fire in the Tel Aviv suburb of Bnei Brak, killing five people. Attacks days before in Hadera and Beersheba, by Israelis thought to have been inspired by the Islamic State, left six others dead.

There was no claim of responsibility for the attack, but the Hamas terror group called it a “heroic operation” that constitutes a “natural and legitimate response to the escalation of the occupation’s crimes.”

It vowed that “resistance” against Israel “is continuing and escalating,” without explicitly taking responsibility for the attack, noting its opposition to Jewish pilgrims visiting the Temple Mount during the Passover holiday, which coincides with Ramadan this year.

There was no immediate comment from Israel’s political leadership, but foreign envoys swiftly condemned the attack.

“Horrified to see another cowardly terror attack on innocent civilians, this time in Tel Aviv. Praying for peace, and sending condolences to the victims and their families. This has to stop,” tweeted US Ambassador Tom Nides.

Tor Wennesland, the UN envoy for Middle East peace, said he was appalled by the attack and condemned Hamas for celebrating it.

“There is no glory in terror. These acts must stop now & be condemned by all,” he tweeted.

Andrew Jacobson, an American-Israeli who fled the sound of gunshots as he sat in a cafe on Dizengoff Street, said he was deeply shaken by the attack.

“Everything felt so normal. Summer was starting, everyone’s outside, everyone’s having fun,” said Jacobson, 24. “It just shattered that reality.”