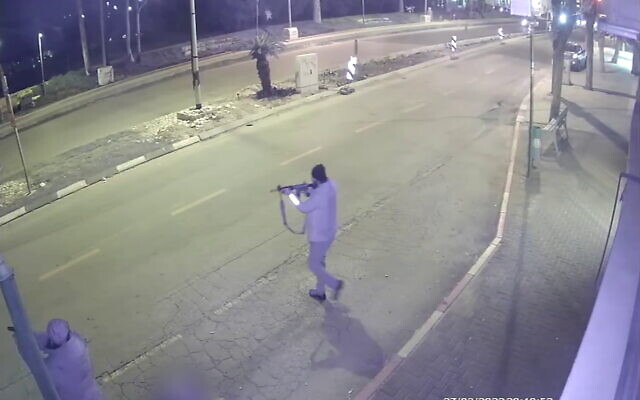 The suspects in a terrorist attack in Hadera, March 27, 2022. (Screenshot: Twitter)

Two police officers were killed and several others were wounded in a shooting attack in the northern city of Hadera on Sunday night, police and medics said.

The two terrorists who committed the attack were believed to be supporters of the Islamic State. The shooting came days after a deadly terror attack in the southern city of Beersheba, which was also committed by a man who attempted to join the jihadist group, raising concerns of further attacks inspired by the terrorist organisation. Meanwhile, officials had been warning of a flare-up of violence before and during the holy month of Ramadan, which begins later this week.

Security camera footage from the scene showed the two gunmen, bearded and wearing white overalls, opening fire at passersby and police officers at a bus stop in the city, close to several restaurants.

The video showed one of the gunmen shooting several times at a victim lying on the ground, before snatching that person’s rifle. He also opened fire on a man seen riding past the scene on a bicycle.

Police said several officers were hurt in the attack and during a gun battle with the terrorists shortly thereafter.

Both of the terrorists were shot dead by members of a unit of undercover officers who were eating at a nearby restaurant, police officials said.

The Magen David Adom ambulance service said its medics treated two men in their 20s in serious condition, and a 45-year-old man and a 20-year-old woman who were moderately hurt. They were all taken to the Hillel Yaffe Medical Center in the city.

“There was an unconscious man and woman at the scene with no vital signs, and unfortunately we had no choice but to declare their deaths,” an MDA medic said.

The hospital said a fifth person was lightly hurt in the attack, and seven others were being treated for anxiety attacks.

The victims were not immediately named.

Video from the scene of the shooting attack in Hadera. Heavy gunfire can be heard. pic.twitter.com/Itq7QtmnoK

While the names of the suspected terrorists, both citizens of Israel said by police to come from the northern Arab town of Umm al-Fahm, were widely published and remain readily available online, police later secured a sweeping gag order from an Acre court that barred the publication of “any details of the investigation and any details that could identify the suspects.”

Police said the attackers arrived at the scene with 1,100 bullets, as well as at least three handguns and six knives.

A video circulating on social media was said to show the two terrorists embracing in front of an Islamic State flag before the attack. The identity of the people in the video could not be independently verified.

“It’s a very serious attack, we are talking about terrorists belonging to the Islamic State,” Internal Security Minister Omer Barlev told Army Radio. “We are witnessing an alarming awakening, that could happen in any country. Police will deploy in all areas.”

Prime Minister Naftali Bennett made his way to the scene, visited the local police station, and held talks with Israel Police commissioner Kobi Shabtai and one of the undercover officers who killed the terrorists.

The attack came five days after four people were killed in a terror attack in the southern city of Beersheba. The terrorist — previously convicted of attempting to join the Islamic State — was shot dead by passersby. He was also an Israeli citizen.

Israeli security services, notably the police and Shin Bet, have faced public criticism in recent days for failing to monitor known Islamic State supporters upon their release from prison.

There has also been a string of recent attacks in Jerusalem and the West Bank.

Last weekend, two officers were hurt in a suspected stabbing attack in East Jerusalem’s Ras al-Amud neighbourhood, and an Israeli man was stabbed and lightly hurt when he was out jogging on Jerusalem’s Hebron Road.

Earlier this month, there were several attacks in Jerusalem’s Old City, and in a nearby West Bank town.