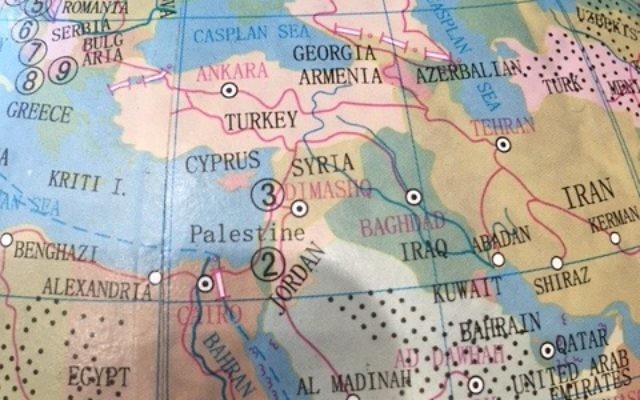 UPDATE – Typo has removed the world globes from sale and online. Responding to a raft of companies on its Facebook page, the company stated on Thursday: “We are reviewing processes around artwork selection.

“We never intended to offend anyone with this product and we are uninterested with any political commentary.

“We take on board your concern that some countries are represented in a key, and as a result we have decided to remove the globes from sale instore and online and will halt all future production until our supplier can provide artwork that eliminates the need for a key entirely.”

A WORLD globe with Palestine printed over the area of Israel will continue being sold at retailer Typo, despite its parent company, Cotton On, being informed of the error.

The State of Israel itself has been numbered and relegated to a key on the globe, which the retailer insists is still “accurate and compliant”.

When the error was initially raised by a customer, the company responded that it did not intend to make a political statement or mean any offence.

However, the company explained the map, which had been purchased from an approved map supplier, “is deemed to be accurate for commercial purposes”.

The AJN was given a similar explanation.

“Due to the scale of the design, 13 countries, including Israel, are represented by a key,” a Typo spokesperson said.

“The artwork for the globe was purchased from an official supplier approved to provide certified world maps for commercial purposes. We have very stringent approval processes for such purchases and take these matters very seriously. As a result, we are working closely with our suppliers to source a certified map that removes any need for a key.”

The spokesperson added that “as the map is deemed accurate and compliant, there are no plans to pull the globe from stores”, but “we will fast-track revised artwork to impact all future production”.

The AJN did query why there was room to write “Palestine” instead of “Israel”, but a response was not provided by deadline.

The AJN also queried who Typo’s supplier is and who certified the map, but a response to this was not received either.

Executive Council of Australian Jewry executive director Peter Wertheim said the roof body would “reserve our judgment until all the facts are known”, but said sadly there is a long history of countries, organisations and companies using educational tools for political propaganda purposes to promote the genocidal idea of a post-Israel world by erasing its presence from maps.

He queried Palestine’s presence on the map given it is not a UN member state whereas Israel is, adding “from a purely practical viewpoint, Israel’s territory is greater in size than the Palestinian Territories and its name is shorter, which therefore makes it easier to fit ‘Israel’ in the space.”

“Sadly, it is becoming all too routine to find items that expunge Israel off  the map or replace it with the yet-to-be-established state of Palestine,” he said.

“Such hostile acts of geographical distortion and disinformation visualise the offensive message that Israel is an illegitimate entity that is not a member of the family of nations.”