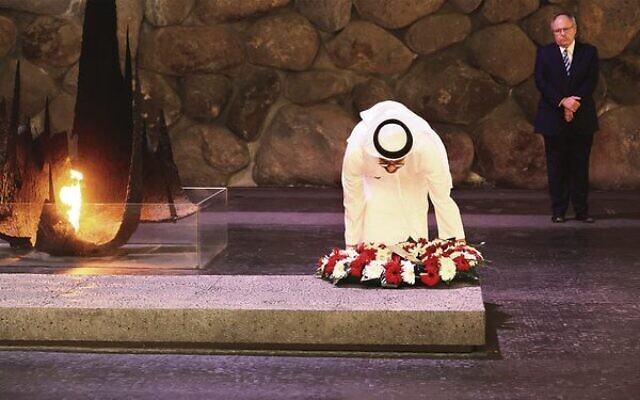 It came as Israel and its regional allies marked two years since the signing of the Abraham Accords, the US-brokered agreement that normalised ties between Israel and the UAE and Bahrain. Morocco followed suit and normalised relations with Israel soon after.

After touring the museum, bin Zayed laid a wreath at Yad Vashem’s Hall of Remembrance.

“I am here today to remind ourselves of the lessons that history teaches us and the great responsibility upon us to act with tolerance for building our community and society,” he wrote in the guestbook. “We must take the brave step of building a bridge of true peace for the coming generations.”

“Visiting Yad Vashem sends the message that regardless of background, religion or race, we all have the duty to learn about the Holocaust and combat antisemitism,” Dayan said.

After Yad Vashem, bin Zayed was hosted by Prime Minister Yair Lapid for a meeting in Jerusalem.

“Welcome to Jerusalem,” Lapid said. “My friend, your historic visit here today marks another milestone in our nations’ friendship.

“Together, we’re building a brighter future for all the people of our region.”

Herzog called the normalisation agreements “a paradigm change in the Middle East, of sounding new voices, of painting new horizons for our children and their future and a celebration of life and change.”

Bin Zayed, visiting Jerusalem for the first time, called it “a privilege and an honour” to be in Israel and to be hosted by the president and first lady.

Ties between Israel and the UAE have flourished since the signing of the accords, with thousands of Israeli tourists visiting the Gulf state, and the countries exchanging diplomatic and security support. Trade between the countries is expected to reach more than US $2 billion this year.