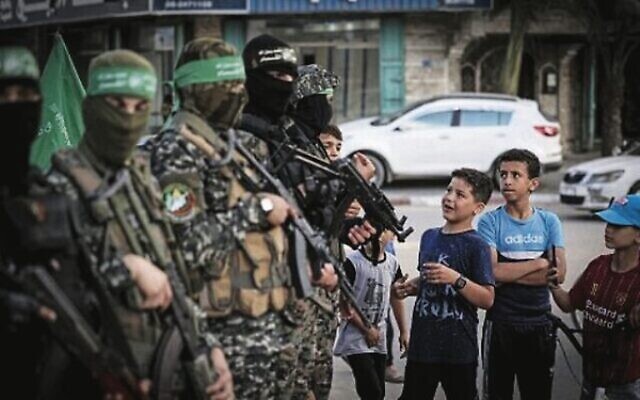 Palestinian boys line up to register for a summer camp organised by Hamas earlier this year. Photo: Mahmud Hams/AFP

THE UK’s decision last week to designate the entirety of Hamas as a terror organisation and outlaw support for the group is a major blow for the Islamist group, which carries out significant fundraising there, Channel 13 reported.

The UK proscribed the terror group’s military wing – the Izz ad-Din al-Qassam Brigades – in 2001. But the Hamas political leadership remained technically in the clear until now.

This enabled Hamas to raise funds that were channelled to institutions including Gaza’s Islamic University, the leading facility for advancing the technology used in Hamas missile and other weapons development, the report said.

Hamas reacted angrily to the decision, with spokesperson Hazim Qasim calling it “a new crime committed by Britain against our Palestinian people”.

The ban, which the government hopes will be approved by Parliament this week, would make it illegal in Britain to be a member of Hamas or to express support for the group, with a maximum penalty of 14 years in prison.

Channel 13 said that Israel had been working with the UK for a long time to bring about the ban, but the final decisions were made following talks between Prime Minister Naftali Bennett and his British counterpart Boris Johnson on the sidelines of the recent Glasgow environment summit.

“We’ve taken the view that we can no longer disaggregate the sort of military and political side,” she said, according to The Guardian. “It’s based on a wide range of intelligence, information and also links to terrorism. The severity of that speaks for itself.”

Speaking in Washington, she added, “This is an important step, especially for the Jewish community. Hamas is fundamentally and rabidly antisemitic.”

Former UK opposition Labour Party leader Jeremy Corbyn notoriously once referred to Hamas as his “friends” and invited Hamas-affiliated people to speak in Parliament, including extremists who praised suicide bombers and called for attacks on British troops.

Highlighting the effects of the new law, a Daily Mail headline on Friday on the imminent ban read: “Jeremy Corbyn faces 10 years in jail if he meets Hamas ‘friends’ again.”

Welcoming the move, Bennett tweeted, “Hamas is a terror organisation, plain and simple. The ‘political wing’ enables its military activity. The same terrorists – only in suits.”