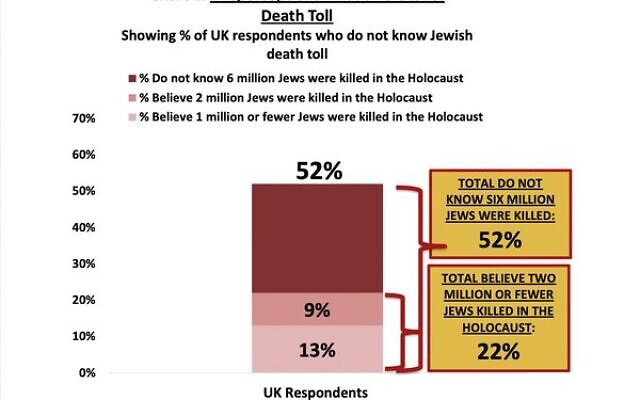 The Conference on Jewish Material Claims Against Germany published the results on the 83rd anniversary of Kristallnacht.

“We are very concerned to see the profound gaps in knowledge of the Holocaust,” said Gideon Taylor, the president of the Claims Conference, which represents Jewish communities worldwide in reparations talks with Germany.

Twenty-two per cent said they believe less than two million Jews died during the Holocaust. One in 10 agreed that “the Holocaust is a myth or has been greatly exaggerated”.

There was also poor knowledge of Britain’s actions to save victims during the Holocaust, with 67 per cent believing all, or at least, some Jewish immigration was allowed. However, Britain did not allow any Jewish refugees in as soon as the war started.

Also, 76 per cent of respondents did not know what the Kindertransport was, a campaign in 1938-39 that brought nearly 10,000 Jewish children from Europe to Britain to save them from the terror of the Holocaust.

“It is particularly disappointing to find that the Kindertransport, an important historic chapter that reflected the best of humanity and should serve as a beacon of hope in the darkest of times, is being forgotten,” said Greg Schneider, Claims Conference executive vice president.

There was firm support for continuing Holocaust education in schools (88 per cent), partly to prevent it from happening again, a development that 56 per cent believe is possible.

Olivia Marks-Woldman, chief executive of the Holocaust Memorial Day Trust, stressed the figures were a “stark warning against complacency in Holocaust education”.

The findings about levels of Holocaust awareness in Britain suggest Americans are less knowledgeable than Britons.

In a Claims Conference survey in the United States last year, 31 per cent of respondents said they believed that substantially fewer than six million Jews were killed during the Holocaust. Forty-five per cent couldn’t name a single concentration camp.