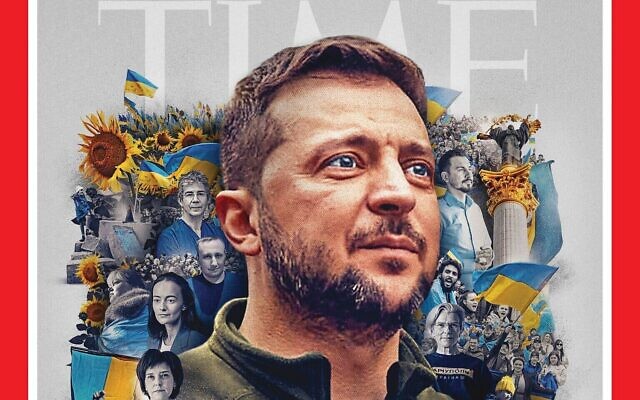 Time magazine named Ukrainian President Volodymyr Zelensky as well as “the spirit of Ukraine” as its 2022 person of the year on Wednesday, for the resistance the country has shown in the face of Russia’s invasion.

Calling Zelensky’s decision to remain in Kyiv and rally his country amid the ongoing war “fateful,” Time editor-in-chief Edward Felsenthal said this year’s decision was “the most clear-cut in memory.”

Since Russia’s February 24 invasion, Zelensky has delivered daily speeches followed not only by Ukrainians but by citizens and governments around the globe.

He has appeared on the frontlines and recently celebrated in the streets of Kherson when Ukraine pushed Russia from the critical southern city.

TIME’s 2022 Person of the Year: Volodymyr Zelensky and the spirit of Ukraine #TIMEPOY https://t.co/06Y5fuc0fG pic.twitter.com/i8ZT3d5GDa

“His information offensive shifted the geopolitical weather system, setting off a wave of action that swept the globe,” Felsenthal wrote in announcing the winner.

“Whether the battle for Ukraine fills one with hope or with fear, Volodymyr Zelensky galvanised the world in a way we haven’t seen in decades,” Felsenthal added.

Zelensky shares the 2022 title with “the spirit of Ukraine,” which Felsenthal said was embodied by the “countless individuals inside and outside the country” who fought behind the scenes, including everyday people such as chefs and surgeons.

Time first presented its Person of the Year award in 1927.

Last year’s honouree was Tesla and SpaceX chief Elon Musk, who has since made major headlines with his high-profile purchase of Twitter.

Zelensky is only the fifth Jew to claim the honour. Facebook founder Mark Zuckerberg earned it in 2010, former Treasury Secretary Ben Bernanke won it in 2009, former business executive Andrew Grove won in 1997 and former US secretary of state Henry Kissinger won the award in 1972.