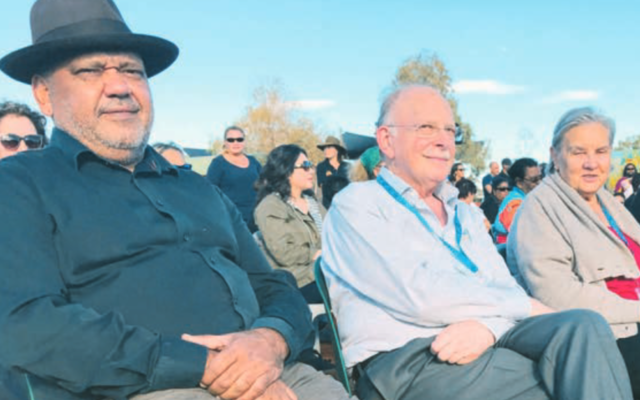 Mark Leibler at the Uluru Statement of the Heart ceremony in 2017, flanked by Noel Pearson (left) and Pat Anderson.

PRIME Minister Anthony Albanese’s swift commitment to the Uluru Statement from the Heart has drawn acclaim from Mark Leibler, national chairman of the Australia/Israel & Jewish Affairs Council, a longtime advocate for an Indigenous Australian voice to Parliament.

A few words into Saturday’s victory speech, Albanese committed himself to the Uluru Statement. In his speech he lauded its “patient, gracious call for a voice enshrined in our constitution”. During the campaign, he committed himself, if elected, to a referendum on an Indigenous voice. And he announced Linda Burney, a Wiradjuri woman, as the first female Indigenous Affairs Minister.

Approached over the referendum on Monday, Leibler told The AJN, “I’m very excited about this … I wondered whether that would be in my lifetime.”

Leibler co-chaired Reconciliation Australia in the 2000s, the Expert Panel on Constitutional Recognition of Indigenous Australians under PM Julia Gillard, and the Referendum Council leading to the Uluru Statement.

“A very moving ceremony” is how Leibler described the 2017 event at which the Statement from the Heart was endorsed by 250 Indigenous leaders. It asked for an Indigenous voice to Parliament, “agreement making” and a truthful record of Indigenous history since white settlement.

The Turnbull and Morrison governments opposed a referendum, due to a popular perception an Indigenous voice would circumvent Parliament. Leibler reiterated this week, “It is not a third chamber of Parliament and is not a veto. It does not interfere with sovereignty.” If a referendum succeeded, the details would be agreed to in Parliament.

Welcoming Albanese’s support, ECAJ co-CEO Peter Wertheim said, “As Australians, we are privileged to live in an era when the long, peaceful and dignified quest for justice by First Nations Australians may at last be realised.”

In 2020, on the Uluru Statement’s third anniversary, Masorti Australia and the Union for Progressive Judaism emphasised their endorsement of the statement.