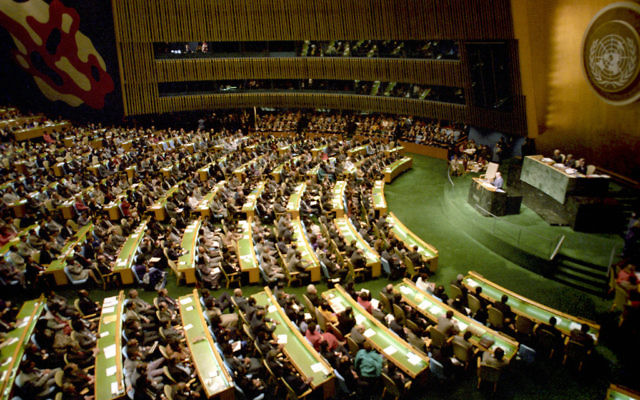 YET again, we have seen the United Nations attempt to punish Israel, rounding up member states to vote on biased motions with little recognition of the violence of Palestinian terror groups – even with the murder of recent oleh Eli Kay by a Hamas terrorist last month still fresh in the minds of the global community.

As the US and Israeli representatives stated, this shift in language is not just morally wrong, but historically and politically false, which makes the 129 votes, which included some supposedly civilised western nations, particularly worrying.

If we are to dig out a silver lining, 19 nations that voted for the Jerusalem resolution on the Temple Mount in 2018 decided to either abstain from the vote or vote against it altogether.

Both the Czech Republic and Hungary, which voted in favour three years ago, switched sides entirely, while 10 other EU countries abstained.

Another resolution, which blamed Israel almost entirely for the lack of peace gave a free pass to the Palestinian Authority, whose intransigence and incitement prolong and exacerbate the conflict, and failed to even name Hamas and Islamic Jihad for the rockets that rain down on the Jewish State and the violent, often fatal, attacks on innocent Israelis.

But this lack of balance goes beyond the Israeli-Palestinian conflict.

Member states who attack Israel refuse to put their foot down when it comes to prolific human rights abusers such as China and Iran.

As executive director of UN Watch Hillel Neuer points out, “In the year 2021, out of some 20 UN General Assembly resolutions that criticise countries, 70 per cent are focused on one single country – Israel.”

We again thank Australia for being one of only a handful of countries to consistently reject these backwards resolutions – a relief not known to our Jewish cousins in other nations who year after year see their governments support these insidious, unbalanced resolutions.