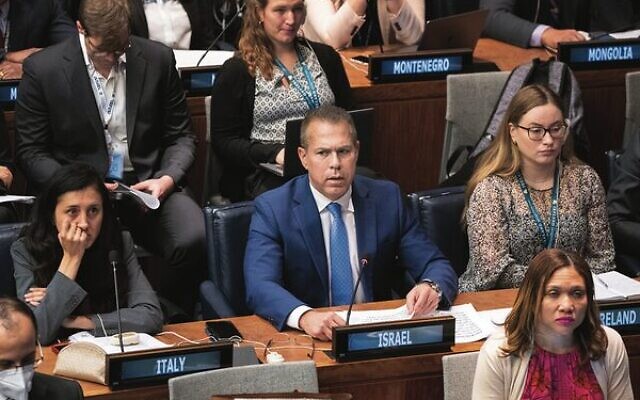 The United Nations General Assembly (UNGA) passed more resolutions critical of Israel than against all other nations combined in 2022.

The UNGA approved 15 anti-Israel resolutions last year, versus 13 resolutions criticising other countries, according to a tally by the pro-Israel monitoring group UN Watch.

Russia was the focus of six resolutions. North Korea, Afghanistan, Myanmar, Syria, Iran and the US were hit with one resolution each. Saudi Arabia, China, Lebanon, Turkey, Venezuela and Qatar, which have poor human rights records or were involved in regional conflicts, had no resolutions criticising them.

Since 2015, the UNGA has adopted 140 resolutions criticising Israel and 68 resolutions against all other countries, UN Watch said.

In the 193-nation assembly’s most recent anti-Israel resolution late last year, it approved a call for the International Court of Justice (ICJ) to weigh in on the Israeli–Palestinian conflict.

The resolution promoted by the Palestinians passed by a vote of 87 in favour, 26 against, with 53 abstentions.

Titled “Israeli practices and settlement activities affecting the rights of the Palestinian people and other Arabs of the occupied territories”, it called on the Hague-based court to “render urgently an advisory opinion” on Israel’s “prolonged occupation, settlement and annexation of Palestinian territory”.

It also called for an investigation into Israeli measures “aimed at altering the demographic composition, character and status of the Holy City of Jerusalem” and said Israel had adopted “discriminatory legislation and measures”.

The ICJ last issued an advisory opinion on the Israeli–Palestinian conflict in 2004 when the UNGA asked it to rule on the legality of the separation barrier.

Israel, the US, the UK, Australia, Austria, Canada, Germany and Italy voted against the most recent resolution.

China, Iran, Ireland, Poland, Portugal, Russia and Saudi Arabia were among those voting in favour, along with Muslim or Arab states with which Israel has relations including Egypt, Jordan, Morocco, the United Arab Emirates, Bahrain, Sudan and Azerbaijan.

Ukraine did not cast a vote. Kyiv’s support for the resolution in a committee earlier this year sparked a diplomatic spat between Ukraine and Israel.

Israeli ambassador to the UN Gilad Erdan denounced the UN for the resolution, calling it a “moral stain” on the world body. He has argued that the vote delegitimises and demonises Israel, including by referring to the Temple Mount only by its Arabic name, Haram al-Sharif.

The Temple Mount is the holiest place for Jews as the site of the ancient temples, and the third holiest site in Islam as the location of the Al-Aqsa Mosque.

Erdan did not appear at the vote because it took place after the start of Shabbat. A US representative voted against the resolution on behalf of Israel.

“No international body can decide that the Jewish people are ‘occupiers’ in their own homeland. Any decision from a judicial body which receives its mandate from the morally bankrupt and politicised UN is completely illegitimate,” Erdan said in a statement.

“The Palestinians have rejected every peace initiative while supporting and inciting terror. Instead of pushing the Palestinians to change, the UN is doing the opposite: helping them to harm the only vibrant democracy in the Middle East.

“The decision to hold a vote that deals with Israel on Shabbat is another example of the moral decay of the UN, which prevents Israel’s position from being heard in a vote whose results are predetermined.”

The Palestinian representative to the UN, Riyad Mansour, applauded the resolution after it passed.

“This vote comes one day after the new Israeli government was formed pledging to accelerate colonial and racist policies against the Palestinian people,” Mansour told the UNGA.

“We trust that, regardless of your vote today, if you believe in international law and peace you will uphold the opinion of the International Court of Justice when delivered and you will stand up to this Israeli government right now because freedom, justice and peace shall prevail.”