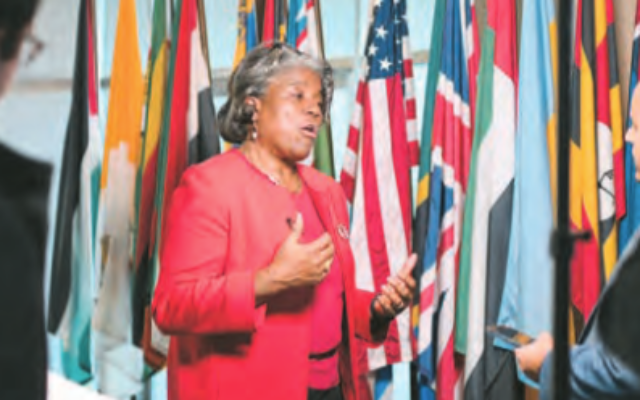 United States ambassador Linda Thomas-Greenfield speaks to reporters after voting to remove Iran from the UN Commission on the Status of Women. Photo: Anthony Behar/AAP

AUSTRALIA’s Jewish leaders have applauded the ejection of Iran from the UN’s Committee on the Status of Women (CSW). The decision was taken last week by the 54-member UN Economic and Social Council, when it adopted a resolution to remove Iran from the CSW for the remainder of its four-year term ending in 2026.

The move follows the Islamic Republic’s vicious repression of protests demanding justice for Mahsa Amini, the 22-year-old woman who died in police custody in September. After being accosted by “morality police” in Tehran on September 13, who accused her of wearing her headscarf improperly, Amini was reportedly beaten on the way to custody. She fell into a coma and died three days later.

The US introduced the resolution, which received 29 votes in favour and eight against, with 16 countries abstaining. The document raised deep concern over the Iranian government’s actions since September “to continuously undermine and increasingly suppress the human rights of women and girls”, and “often with the use of excessive force”.

Speaking ahead of the December 14 vote, US ambassador to the UN Linda Thomas-Greenfield said, “Iran’s membership at this moment is an ugly stain on the commission’s credibility.” Iran’s UN envoy Amir Saeid Jalil Iravani condemned the draft resolution.

Lauding the UN move as a “historic decision”, Zionist Federation of Australia president Jeremy Leibler said it “sends a clear message to Iran’s rulers that the democratic world completely rejects its suppression of women’s rights and its brutal crackdown on those who demand them”.

Executive Council of Australian Jewry co-CEO Alex Ryvchin reflected, “There remains much wrong with the international system generally and the UN specifically, but this decision shows that change is possible. This is a victory of both quiet diplomacy and public advocacy that has proven that the hypocrisy of the UN cannot be sustained and the evil of the Iranian regime must be taken seriously.”

Describing the move as “a positive first step”, Australia/Israel & Jewish Affairs Council executive director Colin Rubenstein said the removal of Iran from the committee “was a reminder that, on occasion, morality and common sense can come to the fore at the UN, despite the domination of that body by undemocratic regimes and human rights abusers”.

“Given Iran’s indefensible record on women’s rights, its participation in that commission was always a farce,” he said. “More needs to be done, inside and outside the UN, to support Iranians fighting for their basic human rights.”