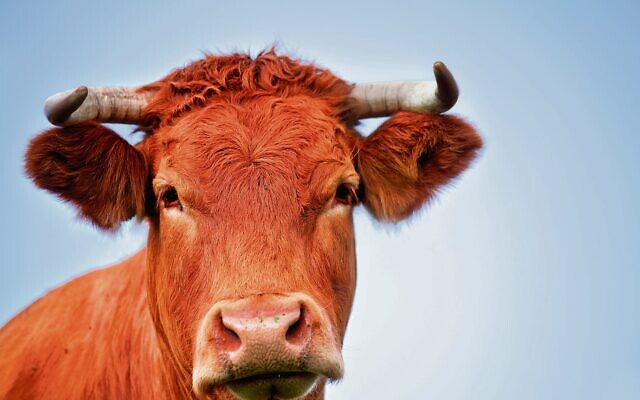 Given that (albeit sadly not applicable in the current era) the focal point of the Pesach celebration is the Paschal lamb, the fact that it involves a Temple-based ceremony mandated ritual purification by celebration participants prior to Pesach. And such purification – a week long process – involved inter alia the mysterious ceremony of sprinkling with the ashes of a “parah adumah – a red heifer”.

Accordingly the second last Shabbat of Adar has been denominated for all time as Shabbat Parashat Parah” – the Shabbat when the laws of para adumah were proclaimed for all to take note in advance of the pending Pesach festival. The relevant Torah chapter (Bamidbar 19) is accordingly added to the weekly Torah reading to be read as the maftir. It is a reading that some opine is a mandated Torah law (which is not the case of regular parasha readings).

However study of those laws brings to the fore apparent contradictions inherent within the framework of Jewish law.

The archetypical example of contradiction within halachah is to be found in this ceremony of the parah adumah. Intended to bring about the purification of one who had incurred the most severe form of ritual uncleanliness through contact with a dead body, the ceremony had the strange consequence that the Kohen involved in carrying it out actually contracted a minor form of uncleanliness as a result of touching the purifying material. To this law the rabbis applied the words of King Solomon, the wisest of men, who wrote: “Amarti echcamah, vehi rechokah memeni – I said that I would become wise, and it (wisdom) is far from me” (Kohelet 7:23).

That being said there is much that can be studied to try and grasp at least an element of its meaning. Perhaps a good start could be made in the writings of Samson Raphael Hirsch. He suggested that ritual uncleanliness of which contact with a corpse is the classic example, always arises from a matter related to death. When purifying the person who encountered a corpse the Kohen himself will be reminded of his mortality – so he too requires at least some level of purification.

As far as this Shabbat is concerned, although nowadays ignored in so many congregations,  a traditional feature of services on special occasions including the special Shabbatot preceding Pesach, was the recitation of “yotzer” – elaborate poetic insertions incorporated into the normal text of shacharit and/or musaf. Such insertions which date back to the Geonic period incorporate midrashim on the featured subject of the special day.

Study of the yotzer for this week (albeit a piece not in the ArtScroll siddur) reveals that the payetan (poet) lists many other contradictions intrinsic to our legal system.

Sha’atnez, the ban on mixing wool and linen, does not apply when woollen tzitzit incorporating the original techelet (a blue dye derived from a particular sea creature) are affixed to a linen four-cornered garment. The law forbidding marriage between a man and his brother’s (former) wife is deferred by a requirement for such a union in the case of levirate marriage, when a brother passed away childless (albeit that this is not now practised and replaced by the alternative prescribed by the Torah, the ceremony known as Chalitzah). While milk and meat constitute a forbidden mixture, one may consume the meat of the udder (after appropriate kashering). While consumption of blood is forbidden, the ban does not prohibit use of certain blood-filled portions of the properly slaughtered and kashered animal. And as a little reflection on the realities of halachic life will quickly show, that list is by no means exhaustive. I personally recall the words of this yotzer passing through my mind many years ago when accompanying my wife to hospital on Shabbat for the birth of a daughter. While using a car is forbidden on Shabbat, it is mandatory to do all that is necessary in the case of medical emergencies when life is at stake.

Does this all mean that Torah is illogical? Of course not. In this day and age we are well aware that few things operate in isolation. In regard to many aspects of the modern era we have become used to the concept of systems analysis. Torah and halachah operate within the framework of their own system. Apparent contradictions arise when a particular command is viewed from different perspectives that require reconciliation. A positive command may overrule a negative one; and there is a fascinating legal interplay between the power of commands of biblical and rabbinic status.

That is not to say that every aspect of Torah can be definitively explained away by human logic. Within the framework of Torah there are major differences between the concept of “chok” as a command without (obvious) logic as opposed to mitzvot characterised as “mishpatim” – legal judgements – or “edot” – testimonies such as the festivals that bear witness to past events. Nevertheless despite the principle that we observe the mitzvot as “gezerot” – decrees – whether or not we understand their basis, commentators also sought understanding even of “chukkim”, through their symbolism or other aspects. At the same time, we are also enjoined to apply to the other laws with obvious purpose, the fact that our carrying out of such laws is predicated not on their apparent reason but simply on the fact that they have been the subject of Divine command.

Interestingly, the rabbis illustrate that very point by citing that same King Solomon, famous for seeking the meaning of parah adumah. They note that regarding certain special mitzvot given to a king, a reason is given for each. Inter alia a king was not to seek to have many horses for to get them he might send persons to Egypt – transgressing the law that one should not return to Egypt. Similarly he should not marry too many wives as they might turn his heart. Solomon in his wisdom thought he could overcome those problems, transgressed the law, and failed.

The message for us is that real wisdom is not that simply acquired passively. As we will shortly discover in the Haggadah, the answer is “tze u’lemad – go out and learn”.