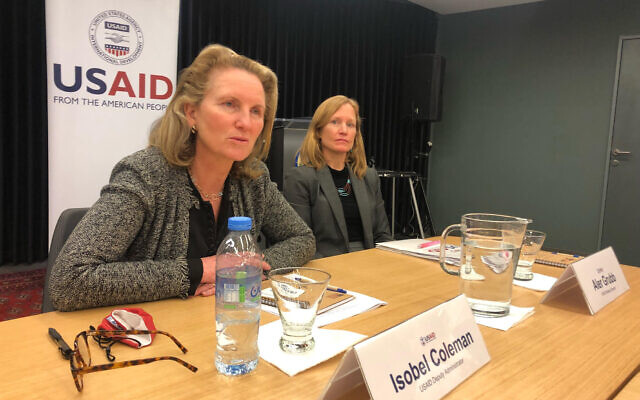 USAID deputy administrator Isobel Coleman speaks to reporters at the US Embassy in Jerusalem, on March 8, 2022. (Tal Schneider/The Times of Israel)

Israeli and Palestinian trade associations will receive millions of American aid dollars to boost cross-border partnerships, but their names will remain confidential, with some potential participants apparently nervous about the joint project.

US Agency for International Development Deputy Administrator Isobel Coleman announced the grants from Jerusalem during a visit there Tuesday.

Initially, US$3.3 million will be distributed to supporting women entrepreneurs, and another US$2.2 million will be funnelled to small and medium-sized businesses in Israel and the Palestinian Authority interested in collaboration.

To distribute the grants to businesses, the MEPPA Fund will operate through a Palestinian trade association and an Israeli counterpart.

Coleman declined to name the trade associations, noting that businesses were reluctant to have their participation in the program publicly disclosed.

“We’re not actually disclosing the names right now,” she said at a press conference with Israeli and Palestinian journalists. “There are many businesses that are reluctant to engage in this. And so we’re allowing the trade associations some space and some time for them to to get comfortable with that.” 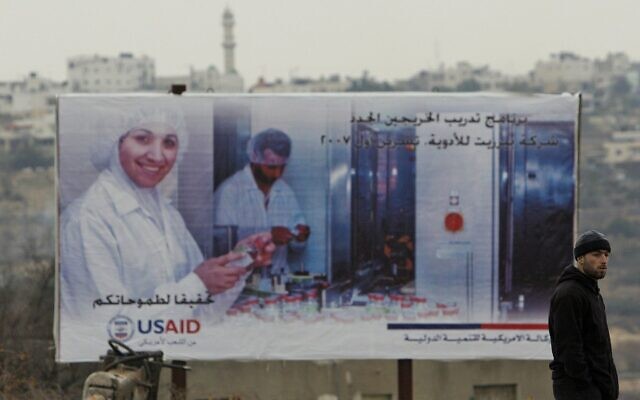 A Palestinian man stands next to a USAID billboard in the southern West Bank city of Halhoul, on December 17, 2007. (AP Photos/Kevin Frayer)

Some Palestinians consider business relationships with Israel taboo and companies may fear a negative backlash if identified as part of the project.

Coleman indicated that the grants would be open to businesses from a wide range of sectors, which would be determined by the trade groups.

The other grant project will allocate support and training funds to businesswomen. The project will focus on training, seed funding, and connecting grantees with veteran entrepreneurs to mentor them. Money will also go to providing business training to young women not already in the field.

Congress created the MEPPA in December 2020 to support Israeli-Palestinian coexistence projects, earmarking US$250 million for the scheme. Decisions on how to allocate the funds are made by an advisory panel chaired by George Salem, a Palestinian-American attorney who filled roles in the Reagan and Bush administrations. Later, he was a foreign policy adviser on Republican presidential nominee Mitt Romney’s campaign. 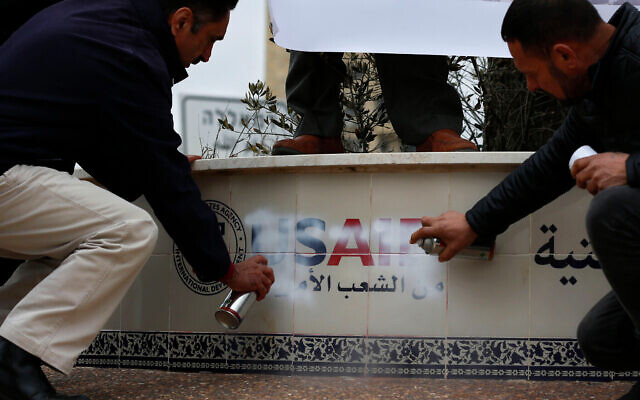 Palestinians spray paint over the US Agency for International Development logo as they protest then-US president Donald Trump’s plan to end the Israeli-Palestinian conflict, at a roundabout that was renovated by USAID in the West Bank city of Ramallah, on February 4, 2020. The Arabic reads, “From the people of the US.” (AP Photo/Majdi Mohammed)

US ambassador to Israel Thomas Nides has pledged to advance MEPPA projects from Jerusalem, reversing the previous administration, which cut funds to Palestinians, including for coexistence projects.

Aside from the MEPPA, the Biden administration has renewed the Economic Support Fund, which allocates US$75 million annually to aid Palestinians in the West Bank and Gaza. The money is slated to go to World Food Program projects, various NGOs, East Jerusalem hospitals, sanitation work, and boosting the private sector, but the fund has yet to distribute any grant money.