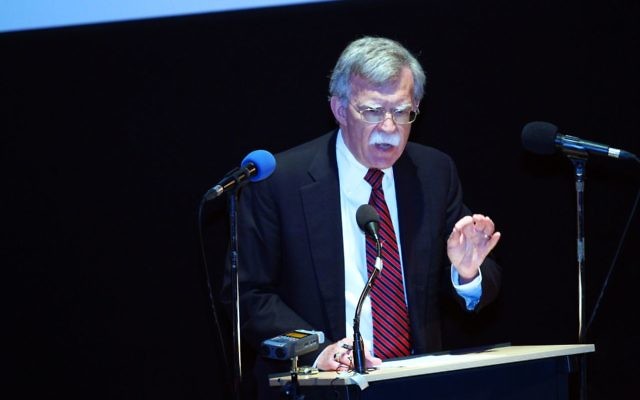 FORMER US ambassador to the United Nations John Bolton addressed a packed house at Melbourne’s Astor Theatre on Monday night as he delivered the B’nai B’rith Anti-Defamation Commission’s 2014 Gandel Oration.

Addressing the 1100-strong audience on the topic “Global Security Threats – The Challenges Ahead”, Bolton was critical of trends in US policy in recent years that he saw as endangering global security.

Referring to what he termed the policy of “exceptionalism” he noted that former president Ronald Reagan took the view that “we stand for America”. For Reagan, peace was achieved through strength –  even if the financial cost was heavy, the costs of not investing in defence would be heavier. For Obama, by contrast, peace is achieved through multilateralism.

Bolton noted that defence spending is US1.5 trillion dollars down since Obama came to power. The number of American warships today, 285, is down to what it was in 1916.

Bolton added that imposition of order is now largely left to the UN rather than being the overt role of the US. Hence, Putin has got away with his adventurism because the US and Europe do little. China with its interests in the South China Sea is watching carefully the decline of US involvement world wide.

A consequence of America’s withdrawal from active engagement is the growth of terrorism. The Taliban is again on the rise, and the danger is not only the impact on Afghanistan but a potential spill over to Pakistan where the risk is access to nuclear arms.

Bolton also claimed Iran will never give up its nuclear arms ambitions because having them symbolises its own global power. As a result, negotiations with the Islamic Republic are futile.

Regarding the peace process, he stated it was doomed from the outset. The problem is not where to draw the line between the two states, rather it is the nature of the Palestinian state that would emerge. Without addressing that crucial issue, he said, no forward movement is possible.