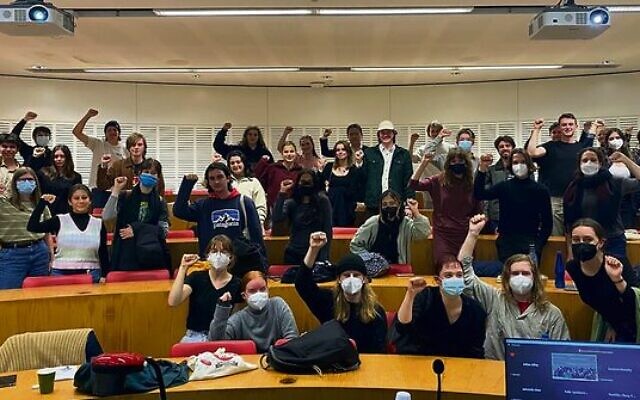 Last month the University of Sydney's SRC passed an anti-Israel motion that has been condemned by the university's vice-chancellor. Picture: Facebook

THE University of Sydney (USYD) has condemned the anti-Israel motion passed by its Students’ Representative Council (SRC) last month.

The SRC passed a one-sided motion on June 1 in solidarity with Palestinians, referring to Israel as an apartheid state and endorsing the boycott, divestment and sanctions movement. Titled “From the River to the Sea” and an overt denial of the right of the State of Israel to exist, the motion condemned major institutions in Australia, as well as both the Labor and Liberal parties, for remaining “complicit in the Israeli occupation of Palestinian land”.

It rejected “that opposition to Israel is antisemitic”, saying “not all Jewish people support Israeli apartheid”.

In a letter to NSW Jewish Board of Deputies (JBD) CEO Darren Bark last week, USYD vice-chancellor Mark Scott said the motion “does not represent the position of the University of Sydney” and that the university “deeply values our Jewish community members, and the close ties we share with the broader Jewish community”.

“It is important to note that the SRC is a separate entity to the university, run by students and which operates independently,” he wrote.

“And while one of our core pillars is the protection of academic freedom and free speech, we are reminding the SRC that we believe they share a duty of care to their fellow students to ensure our campus remains one where racist, intimidating, abusive or threatening behaviours are not tolerated.

“Respect, inclusion and diversity are among our core values and our Student Charter lays out our expectations for students, including the need to avoid engaging in any bullying or discriminatory behaviour.

“We do not tolerate antisemitic language or behaviour on our campuses and take any complaints extremely seriously.”

Scott also said the university does not consider the boycott, divestment and sanctions policy “appropriate”.

“It is not a university-endorsed policy and we remain open to and encourage links with countries all over the world.”

Welcoming the letter, Bark said, “The JBD has been engaging with the university and the Australasian Union of Jewish Students (AUJS) and will be holding a meeting with vice-chancellor Scott shortly to progress these discussions.”

At the time of the motion Bark expressed concern at the SRC’s “history of divisive, hateful and one-sided motions against Israel”.

“This rhetoric has no place in our tolerant, multicultural society; every student has the right to feel safe and included on campus,” he said.