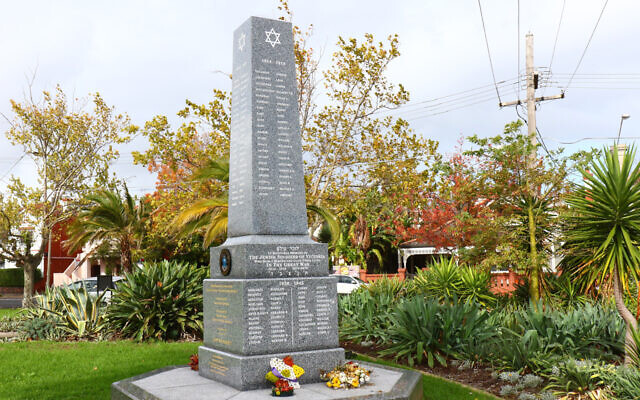 Plans had been underway for a service at the VAJEX memorial in Ripponlea followed by a luncheon at Caulfield RSL.

But VAJEX president Marvin Bude told The AJN, “At this stage, until the health situation settles, I cannot justify any exposure to our members who range from 70-90 years old.”

However, he added that it is his hope “that next year brings health, happiness and as little of COVID as possible … We will again have our commemoration services, as well as our Anzac commemoration.”

Writing in The AJN this week, VAJEX board member Garry Fabian stated that Remembrance Day, originally commemorating the end of World War I, “connects with all Australians, but also has a special connection with our Jewish community and VAJEX Australia in particular”.

“The Jewish record in services in both World War I, World War II and other conflicts, is a record of immense pride,” he stated.

“VAJEX Australia is the symbol and torch bearer of the Jewish spirit which permeated the Allied fight for survival and freedom. It is a beacon which has focused on the Anzac spirit which flowered in abundance through the blood of Australian Jewry.”

St Kilda Shule, meanwhile, will be holding a commemoration at the gravesite of General Sir John Monash – a congregant of the synagogue – at Brighton General Cemetery in Caulfield South today (Thursday) to mark Remembrance Day.

The ceremony will feature prayers from rabbis, with the shule’s chazan Brett Kaye reciting the memorial prayer.

Senior ADF chaplain Rabbi Ralph Genende will address the gathering and recite a prayer for Australia.

VAJEX immediate past president Harold Lubansky will recite The Ode. Rabbi Yaakov Glasman, St Kilda Shule’s senior rabbi, will blow a shofar in memory of the fallen, and to honour Monash, the iconic World War I commander whose vision helped changed the direction of the war.

Ahead of the ceremony, Rabbi Glasman reflected, “Judaism emphasises the critical importance of remembering those who sacrificed for the benefit of the next generation. On Remembrance Day, we honour those who laid down their lives for our country and express our eternal gratitude.”