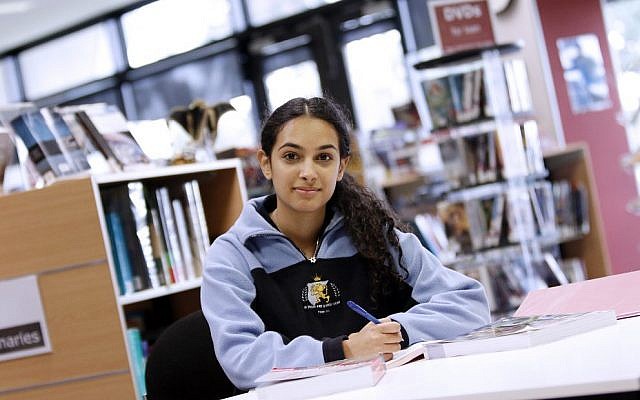 WHEN Mount Scopus Memorial College student Ramona Chrapot read a sample response in her VCE coursework which claimed that Israel destroys the houses of Arabs living there simply because they are Muslim not Jewish, she could not believe her eyes.

The sample answer, on religious discrimination, provided as part of a year 12 VCE school assessed coursework (SAC) package in Health and Human Development, stated, “An example of an individual being persecuted for their religion could be the Arab families living in Israel who practise the Islam religion rather than the Jewish religion. Including unlawful demolition of homes and forced displacement and detainment of these families.”

Chrapot told The AJN she was “shocked” to see the false statement. “It’s sad to see the education system is misleading students around Victoria, especially in 2019. Students that are not informed are being instilled with falsehoods, and they will become the future leaders.”

The sample response was provided to schools by the Australian Council for Health, Physical Education and Recreation (ACHPER). It used the example – a distortion of Israel’s policy of destroying the homes of some terrorists’ families – to illustrate religious discrimination.

“Muslims in Israel are categorically not persecuted for their religion,” Rabbi Kennard wrote to ACHPER, stating that Muslims’ houses are not demolished nor are they displaced or detained “because they do not practise the Jewish religion”.

“I am not aware that even the most biased anti-Israel organisation makes this particular claim. It is the case that some Arab individuals (who may or may not be Muslims) are punished when found guilty of terrorist activity and such punishments may include home demolition or imprisonment,” Rabbi Kennard stated.

ACHPER CEO Hilary Shelton initially responded to Rabbi Kennard that, as a result of his complaint, the organisation had asked for a recall of these materials and it was not anticipated that the sample “would offend any individual or group”.

But the principal then emphasised to her, “The issue is not that individuals or groups were offended … The issue is truth and falsehood,” adding he would not regain confidence in ACHPER’s education materials until it explained how the falsehood came to be included.

Shelton then responded to Rabbi Kennard that ACHPER would additionally conduct a review to ensure that it does not happen again.

Stating he had received a call from Shelton on Tuesday evening, Rabbi Kennard posted on Facebook, “She agreed that something had gone wrong and needed correcting.”

Reflecting on the episode, Jewish Community Council of Victoria executive director Judy Fetter stated, “The basic premise in the practice SAC assessment task is false, as well as being political and biased. Such lack of accuracy and impartiality, given that six experienced teachers were involved in the preparation of the material, is indicative of systemic and endemic failures within ACHPER.”

ZFA president Jeremy Leibler said, “It is absurd that of all the examples the publishers could have used to highlight examples of religious discrimination, they have elected to single out Israel, a country where Arab citizens have full equal rights.

“One can’t escape the irony of providing this factually incorrect comparison when there is actual religious discrimination in neighbouring Arab countries against both Christians and Muslims of specific denominations. Israeli Arabs are elected members of the Knesset, serve as Justices of the Supreme Court and enjoy the same rights as Jewish or Christian Israelis.”

Describing the material as “libellous, offensive and ultimately false”, Caulfield Liberal MP David Southwick wrote to State Education Minister James Merlino, calling on him “to condemn ACHPER for disseminating these politically biased and inaccurate papers and work to ensure that such materials are not distributed as part of the Victorian education curriculum in the future”.

With a 59 per cent increase in antisemitic incidents in Australia in 2017-18, compared to the previous year, Southwick said, “Such biased materials merely act to heighten hostility towards the Jewish community, particularly when directed to the broader student body, who may not be informed as to the many complexities of Middle Eastern politics.”