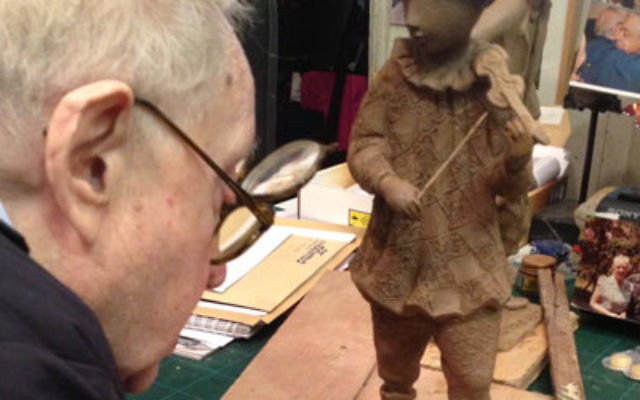 WHEN artist Yosl Bergner arrived in Australia from Europe in 1937, he studied at the National Gallery Art School and soon became an integral part of the Melbourne art scene.

In 1948, Vienna-born Bergner decided to return to Europe to work and, after two years of travelling and exhibiting, he settled in Israel, where he continued his artistic career. In 1980, he was awarded the Israel Prize for painting.

Almost four years ago, when Bergner turned 90, he decided to create sculptures as well as continue to paint in his Tel Aviv studio, and this week a special selling exhibition of 15 of his sculptures will be held at Leonard Joel in South Yarra.

Melbourne artist Shaike Snir, a close friend of Bergner’s for many years, has helped bring the exhibition dream to fruition in his role as Australian representative of Israel’s Dan Gallery.

“When Yosl turned 90 he started doing sculptures based on a small timber sculpture that he had made in the 1960s,” explains Snir.

“Two years ago in Haifa there was an exhibition of his sculptures which was very well received – people loved his work.”

In March this year a small bronze sculpture by Bergner titled Yossi with the Fiddle was sold at a Leonard Joel fine art auction for $21,960.

The 15 sculptures being sold in the Leonard Joel exhibition range in height from 37 cm to 1.35 metres and were made between 2011 and this year, with his most recent works being The Dreamer and The Kite Runner. The sculptures feature heroes of Bergner such as a jockey, musician, butterfly lovers and brothers.

Ten of the works are single editions and each bronze sculpture comes with a letter of authenticity signed by Bergner.  Snir has made several trips to Israel in recent years and visited Bergner two months ago in his studio, which is next door to the home he lives in with his Australian wife Audrey.

“Each day Yosl follows the same routine as he works on his paintings and his sculptures, some of which are amazingly intricate, even though he is very frail now,” says Snir.

“He loves to keep working. His creativity keeps him going; every day he has new ideas for his art.”

PHOTO of Yosl Bergner working on a sculpture in his Tel Aviv studio.