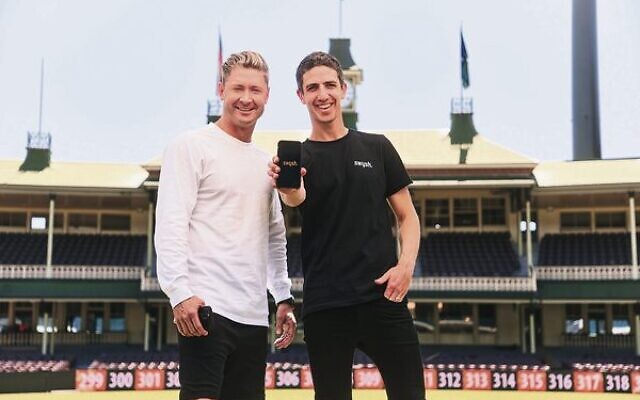 Twenty per cent of the proceeds from every video message are donated to children’s charities in Australia, supporting the Starlight Children’s Foundation and Polished Man.

Starting with 10 soccer players on the platform, Swysh has grown to 1000 athletes across Australia and New Zealand and has raised over half a million dollars for charity.

“[Charity] is a special part of what we do, and it really differentiates the Swysh product, but the credit really goes to the athletes who are using their position in the community to help those who need it,” Roth said.

“It’s been amazing what [the athletes have] been able to collectively do, we just provide the technology and infrastructure for them to do so.”

“It has been very easy for me to be passionate about Swysh since the beginning as it combines three of my biggest interests being sport, business and philanthropy,” he said.

Growing up in Sydney and attending Moriah his whole school career, Roth said he felt “very connected” to the Jewish community.

“I’ve been brought up in a family, and a community for that matter, that is very philanthropic minded, so that has definitely played a part in integrating charitable giving in our business model,” he said.

Swysh’s goal is to pass a million dollars in donations in the next six to 12 months, and with Father’s Day being the busiest period of the year, Roth said he hopes to reach that goal soon.

“We want to build Swysh as big as we possibly can because the impact that we have not only on our charity partners but on every fan that receives a Swysh video message, it’s something that ­motivates us,” Roth said.

“We’re talking to some incredible organisations which is really exciting as we plan on both maximising and broadening our impact on the community as we expand.”