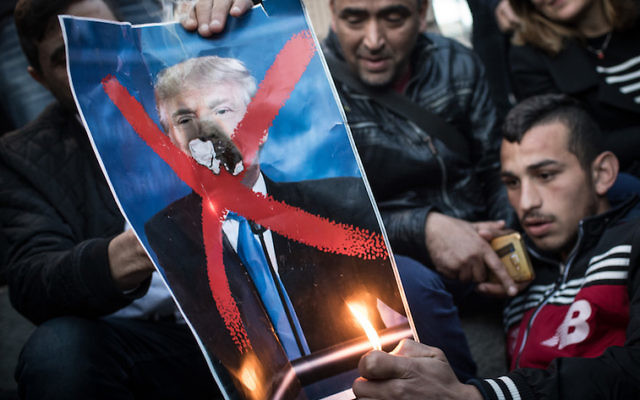 Protesters burn a poster of Donald Trump in front of the Damascus Gate on Monday. Photo: Chris McGrath/Getty Images

AS riots spread across the West Bank and Gaza militants fired rockets, the jubilation in Jerusalem continued this week.

Despite the violent reactions from Palestinians, Donald Trump’s announcement had Jewish residents and leaders gushing.

He “will be remembered in the history of the Jewish people as one who stood at the forefront fearlessly”, Chief Rabbi Yitzhak Yosef declared in a letter, together with almost 250 other Israeli rabbis.

Prime Minister Benjamin Netanyahu said that Trump “has inscribed himself in the annals of our capital for all time”.

Since Trump’s decision to recognise Jerusalem as Israel’s capital and move the US embassy there, dozens of violent riots have taken place in the West Bank and eastern Jerusalem.

As of press time eight rockets had been fired towards Israel from Gaza, one of them landing at the entrance of a kindergarten – but outside school hours so nobody was hurt. In Jerusalem, however, terrorists successfully struck a target.

On Sunday a Palestinian man, acting as if he wanted to enter Jerusalem’s central bus station, suddenly took a knife and stabbed security guard Asher Elmaliach, 46.

He was seriously hurt, but his condition then stabilised. Security forces have raided the West Bank home of the alleged attacker Yassin Abu al-Qura, 24.

Six Gazans are reported dead, two killed at the protest by the border with Israel and four allegedly by Israeli strikes.

Israel is not confirming the reports – and in the case of one alleged attack responsible for two deaths, has denied striking.

Arab citizens of Israel, as well as Palestinians, were involved in violence. Arabs held several demonstrations, including one outside the US embassy on Tuesday where banners described Trump as a snake.

In the Wadi Ara area of northern Israel, protesters threw rocks at a bus on Saturday, breaking the windscreen and hurting three people.

Netanyahu’s response has been that violence will get Palestinians and their supporters nowhere, and the only option they have is to accept the new reality.

“Jerusalem’s never been the capital of any other people,” he said during a visit to Paris on Sunday. “I think the sooner the Palestinians come to grips with this reality, the sooner we’ll move towards peace.”

Some on the Israeli left were dismayed by the decision, mostly saying that while they consider Jerusalem to be the capital, Trump should wait to give his recognition until a peace process is gathering steam.

Zehava Galon, head of the dovish Meretz party thought that the US decision “will certainly give a tailwind to the lunatic right in Israel and the Palestinians”.

But on most of the spectrum of Israeli politics, Trump’s move has been greeted with consensus.

Yair Lapid of the centrist Yesh Atid parry has been enthusiastic, and echoed Netanyahu in his answer to critics.

“Policies should not be dictated by threats and intimidation,” he said. Avi Gabbay, leader of the main left-wing party, Zionist Union, also praised Washington.

Internationally, the reaction against Trump’s move continues to be strong – with one notable exception being the Czech Republic, which announced that it recognises West Jerusalem “to be in fact the capital of Israel”.

Palestinian President Mahmoud Abbas responded to the US with disdain, and claimed that Trump has been “undermining of all peace efforts”, and accused his US counterpart of violating international norms.

Abbas is understood to now be refusing to meet US Vice-President Mike Pence when he visits the region later this month.

Netanyahu hit back, saying that he is “not used to receiving lectures about morality” from a leader who bombs villages, assists Iran, jails journalists and “helps terrorists, including in Gaza, to kill innocent people”.

Even as French President Emmanuel Macron hosted Netanyahu this week, he called the US position a “threat to peace”.

The Russian President Vladimir Putin said that it may “finish prospects for the Palestinian–Israeli peace process”, and a top European Union official hit out at Netanyahu for saying that he wants other countries to follow the US.

“He can keep his expectations for others because from the European Union Member States’ side this move will not come,” said EU High Representative Federica Mogherini, ignoring the Czech announcement. Mogherini also commented: “We do not want to see a discredited US administration when it comes to negotiations in the Middle East.”

Pope Francis has spoken of his “deep concern for the situation that has been created in the past days”, and an umbrella organisation for Jerusalem’s churches was “certain” that a US change on Jerusalem “will yield increased hatred, conflict, violence and suffering in Jerusalem and the Holy Land, moving us farther from the goal of unity and deeper toward destructive division”.

In the Jewish world, the Conservative movement was pleased by Trump’s announcement but the head of the Reform movement, Rick Jacobs, said that while the President is right in principle to move the embassy, it’s wrong to do so without a peace process in place.

This statement brought a rare rebuke for Reform from Jewish Agency chairman Natan Sharansky, who called it “terrible”.

Jewish–Arab tensions are on the rise in Israel. Jewish Israelis were incensed that fellow citizens carried out the stoning attack on the bus on Saturday.

“I call on the citizens of the State of Israel simply to boycott Wadi Ara,” he said, arguing that its residents “don’t belong in Israel” and should be subjects of the Palestinian Authority instead.

Lieberman has long said that he wants Wadi Ara to become part of a future Palestinian state. His boycott call infuriated the right-wing, which said that he shouldn’t talk about giving up Israeli territory, and the left, which said he was tarnishing all of the area’s Arabs for the actions of a few.

Questions abound as to whether, after his policy shift, Trump will be able to coax the Palestinians to sit with Israel at the negotiating table, and persuade the Israelis to yield territory.

At press time, unconfirmed reports were surfacing suggesting that Netanyahu told Macron that he was prepared to make concessions in the context of a new US-led peace plan.