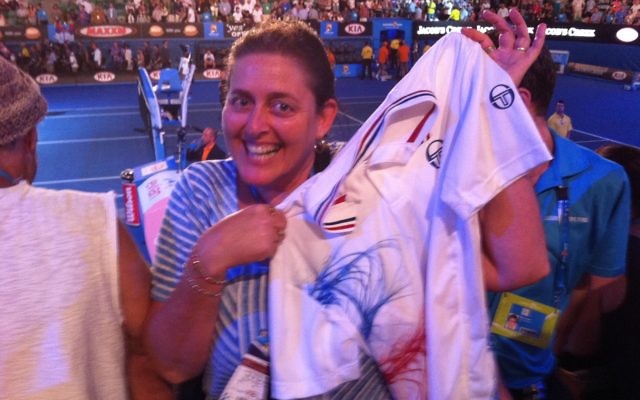 FOOTAGE of Jewish Melburnian  Yael Rothschild catching a T-shirt thrown into the crowd by Novak Djokovic at the final of the Australian Open has prompted an alarming outpouring of online anti-Semitism.

The video went viral soon after it was broadcast on January 29, with angry posters on social networking sites accusing Rothschild of stealing the T-shirt from a young girl, Melissa Cook, who also tried to catch it.

A Facebook page called “Yael Vi vat Rothschild- GIVE BACK the Shirt to Mellisa COOK”, has been “liked” by 1184 people and attracted 331 comments, many of them viciously attacking Rothschild’s Jewish heritage. The creator of the page apologised to Rothschild in a post, saying the page was never meant to “belittle” or “make fun of” Rothschild’s religion, but at the time The AJN went to print the offending posts had not yet been removed.

The page was just one of several similarly themed pages.

Speaking exclusively to The AJN, Rothschild described as “shocking” the abuse levelled at not only her, but also at her family in the wake of the footage going viral.

“[There were] lots of nasty anti-Semitic remarks, lots of nasty comments on my children’s and my [Facebook pages]. My husband’s auntie whose name [also] starts with ‘Y’ got lots of phone calls. Our address was made public. It was just shocking,” Rothschild said.

Many of the comments were posted on YouTube, where videos of the incident involving Rothschild attracted around 100,000 views.

One poster spewed: “She is a Jew, so it’s her blood. She can’t help it.” Another wrote “Jewish greedy, unbelievable”. Further comments included “Typical Jew … Greedy”; “The woman who stole the shirt name is Yael Rothschild, a dirty jewess”; “she grabbed it because she was a filthy Jew” and “Damn old Jewish woman Mrs Rothschild. They steal also from children.”

Chairman of the  Anti-Defamation Commission, Anton Block said his office was “deeply concerned” about the abuse.

“The posts about Yael Rothschild were appalling – not just as personal attacks but to all Jews. It’s disgusting that YouTube and Facebook failed to remove remarks such as ‘Where is Hitler when you need him?’ and ‘Covetous Jew’,” Block said.

“We are appalled at the deeply offensive remarks attacking all Jews that were posted simply because the person involved has an identifiably Jewish name.”

Rothschild auctioned off the offending T-shirt on 3AW’s Mornings with Neil Mitchell, with the mother of the girl in the video buying it for $5500. The proceeds went to the Alannah and Madeline Foundation, which raises funds for abused children and their families.

“I decided to make a negative situation into a positive one and we sold the T-shirt by auction on the Neil Mitchell radio show. That’s it. We now put it to rest,” Rothschild said.