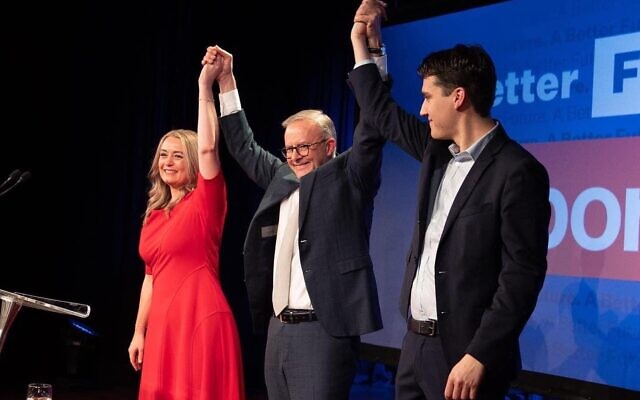 “Today I rang Dr Monique Ryan to congratulate her on the election result in Kooyong and wished her well for the term ahead,” Frydenberg said.

“It’s been an incredible privilege to have served as the local member for the last 12 years. To the people of Kooyong, I can only say thank you.”

Today, I contacted Dr Monique Ryan to congratulate her on the election result in Kooyong.It’s been an incredible privilege to have served as the local member for the last 12 years. Kooyong, thank you.

According to ABC’s election count, Labor had won 72 of the 76 seats it needs to govern in its own right as of Sunday morning, with the Coalition languishing on just 50.

“Congratulations to Anthony Albanese upon being elected Prime Minister of Australia. Israel and Australia are close friends and I look forward to working together with @AlboMP to deepen that friendship & strengthen the bond between our nations,” he said.

“I would also like to thank @ScottMorrisonMP for being a good friend and a valuable partner. I wish you all the best.”

Labor’s Josh Burns was ahead in Mcanamara on Sunday morning, though the seat had not yet been definitely called in his favour.

Frydenberg told supporters in Kooyong on Saturday night, “There’s still thousands of postal votes to count. And so while it’s mathematically possible that we win in Kooyong, it’s definitely difficult.”

And while not conceding defeat, he spoke like a man who saw the writing on the wall.

Sharma spoke of what had been achieved during his term and also paid tribute to his fellow fallen Liberal MPs.

“It’s clear that several, indeed a large number of my colleagues are doing it tough right now,” he said.

“And if we cannot keep them tonight we have to make sure there is a space for their views in the party.”

Spender told her supporters, “It is a victory for the community and what we have achieved together.

“We stand for the future, not for the past … You’ve all invested in the democracy of the country.”

The Executive Council of Australian Jewry (ECAJ) congratulated Albanese and Labor on their victory.

“The ECAJ looks forward to working with the new government. Whilst we may not always agree with each other, we anticipate that the relationship will always be based on mutual respect,” the ECAJ said.

The ECAJ also paid tribute to “a number of long-standing friends” of the community who have lost their seat, as well as congratulating those who had been elected to the parliament for the first time.

Zionist Federation of Australia president Jeremy Leibler said, “Labor has always been a great friend of the Australian Jewish community and an integral part of the bipartisan consensus on Israel. Mr Albanese is committed to the Australia-Israel relationship, and to a negotiated, peaceful and democratic two-state outcome to the Israeli–Palestinian conflict.

“These are priorities shared by the Australian Jewish community, and we look forward to working closely with Mr Albanese and his government.”

Meanwhile, The Greens looked to have won three additional seats in the House, bringing their total to four.